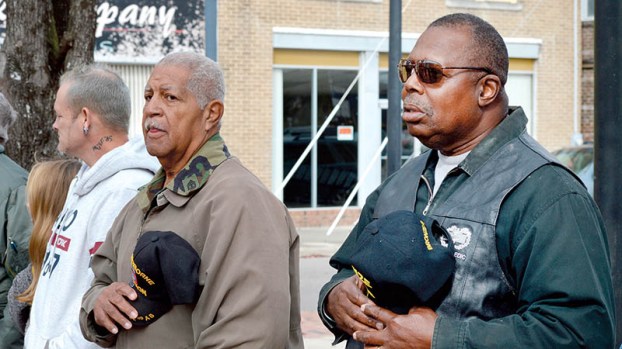 Military veterans attending Monday’s Veterans Day ceremony at No Man’s Land Park in downtown Ahoskie stand and remove their caps to pay respect to those who served. | Photos by Danny Bowman Jr.

From box car to city streets

AHOSKIE – What was done in a railroad car parked in a forest outside of Paris, France on Nov. 11, 1918 at 11 am 100 years ago is one reason people in the United States gather annually on this special day to celebrate our nation’s military Veterans.

It began with the signing of an Armistice Agreement between the Allied Forces (US, Great Britain, France and others) with Germany to end the fighting of The Great War, today known as World War I.

US Congress later declared Nov. 11 Armistice Day. This was done to honor the brave men who fought in the war. In 1926, Armistice Day officially became a holiday. In 1954 the name was changed to Veteran’s Day to honor all US Veterans of all wars beginning with the Revolutionary War. 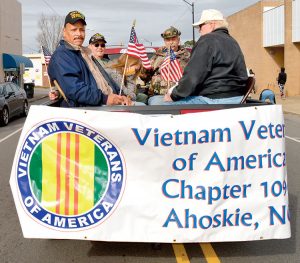 Members of Chapter 194 of the Vietnam Veterans of America ride along Ahoskie’s Main Street as part of Monday’s Veterans Day Parade.

The parade stepped off with the Hertford County High School’s ROTC and band leading the way. Following were American Legion officers each driving labeled cars. Then came an assortment of antique 60’s Mustangs driven by Vietnam Vets. Four wheelers, go-karts, Ahoskie Zodiac Motorcycle Club and Girl Scout Troop 628 were present. An antique fire truck and a police escort completed the participants. No parade is complete without excited children standing by to receive the numerous candies thrown or handed as the parade progressed.

After the parade, a ceremony to honor the Veterans was held at No Man’s Land Park in downtown Ahoskie.

Joyner served in the US Navy from 1964 – 1968. He has been a member of American Legion Post 147 in Rockingham, NC for 48 years where he is National Executive Committeeman. He has held various offices and distinguished titles over these many years. He is part of a Legion family with wife, Julia, daughter, Jamie, and granddaughter, Annah, all serving in the Legion Auxiliary.

His son, Johnny, and grandsons, Nathan and Andrew, are members of the Sons of American Legion. Son-in-law, Jason, is an active military member.

Joyner speaks on the importance of writing to active service members. These letters may end up to be keepsakes for our soldiers. It might just be a generically written “Dear Soldier” letter for us, but it may mean a great deal more to the solider who receives it.

One such incident occurred when a Wisconsin County Sheriff, who like many law enforcement was a veteran, received a letter while serving his country. It was so special to him he kept it for 15 years. Years later, as he was going through his keepsakes, he ran across the letter decorated with Santa Claus images, reindeer and Christmas wreaths. He looked at it again and noticed a remarkable coincidence. The letter had a signature that stood out to him. It was signed by a then 4th grader from a local elementary school.

He posted it on the bulletin board at the Sheriff’s office. Seeing the posted letter shocked one of his deputies. It turns out the deputy who had been hired earlier by the Sheriff was the little guy who authored the letter. It had taken the Sheriff years to put the two names together.

Joyner said, “While instances like these makes the worlds seem small, it is America’s Veterans who make the world so much safer.”

WWI led to the birth of the American Legion. The United States committed to take care of our veterans injured during battles, training exercises, etc. This commitment covers all veterans regardless of race, religion, gender or economic class.

In spite of a strong economy, veteran homelessness is higher than others. Often a veteran’s highly skilled military occupational specialty doesn’t transfer to the civilian sector.

When the National Guard or Military Reserves deploy, America’s businesses ensure their civilian careers do not suffer.

Joyner stated the way to eliminate veterans’ homelessness is to provide treatment for PTSD and other military related mental and physical issues and offer education to qualify for civilian jobs.

“Veterans have defended the freedom of others to live the American dream,” he noted. “A simple proven way to thank a veteran is to hire a veteran. This job gives the veteran an opportunity and shot at the American dream. It is smart business to hire veterans continues Joyner.

“Millions of brave men and women have stood for freedom since our country’s founding. We owe them a debt of gratitude for their service and sacrifice. We also remember their families and sacrifices they made,” Joyner remarked.

“Today is the day for civilians, and, in fact, all Americans, to recognize those who have given us our freedoms, the United States military Veterans,” said Joyner.

“Thank you for all that you do for our country,” wrote the young 4th grade student 15 years ago.

Veterans and their spouses were invited for lunch at the Ahoskie United Methodist Church’s fellowship hall.

Rev. Billy Haddock welcomed everyone in the packed hall with a heartfelt welcome. He thanked everyone for their service and offered a prayer.

WINDSOR – David Byrum says he’s had enough and the time has come to take action. The father of a... read more