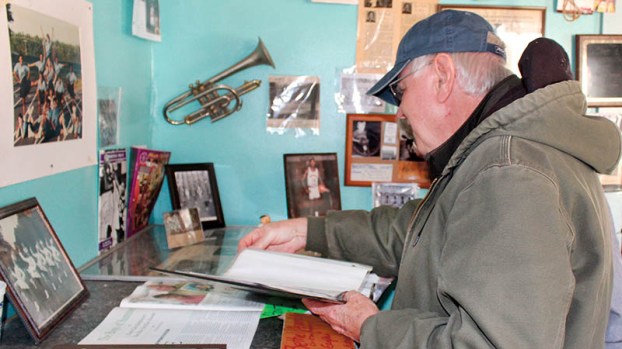 A visitor views one of the displays at the ‘Back in the Day’ museum at Camden and Queen Streets in Windsor. Museum tours, vendors, and carriage rides were all part of the Windsor 250 Celebration marking the sestercentennial of the Bertie County seat. For additional photos, see page 8A of today’s edition and visit the R-C News-Herald’s Facebook page. | Staff Photos by Gene Motley

WINDSOR – They have much in common, 250 years of the town of Windsor and veterans of the American armed services. Things like resilience, courage, fortitude, and strength.

Small wonder that both were celebrated on Monday under drizzly skies, but the weather mattered little.

Armistice Day was created following the first World War and came of age nearly a half century later when the celebration of the American veteran morphed into Veteran’s Day.

Windsor’s beginnings were no less auspicious.

Over two centuries ago, on Jan. 8, 1768, the Colonial Assembly passed an act to create “New Windsor on 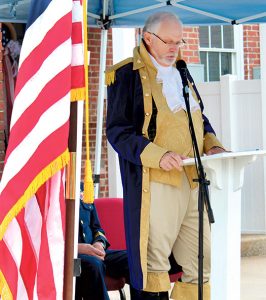 Windsor Mayor Jim Hoggard, attired in period costume from the 18th century, reads various proclamations dedicated to the town from across America, including one from President Donald Trump.

the Cashie River”, and thereafter lots were sold and deeds issued. By 1800, Windsor was quite an inland shipping center for cotton, tobacco, grain, and even livestock.

But as the centuries passed and events came and went, the town always managed to retain its small-town ambience.

“We were Mayberry before there was Mayberry,” jokes current Windsor Mayor Jim Hoggard; and there’s plenty of truth in that.

Windsor actually began its celebration on Saturday, Nov. 10, with the Opening Ceremonies behind the Town Hall as Mayor Hoggard read proclamations from towns of Windsor as far away as Washington state. More tributes would come on Monday.

Saturday featured downtown vendors, an old-homes tour, and the opening of several Windsor area museums (Back-In-the-Day, Arts Council, Electric Train, Farmers and Craftsmen, and the Roanoke-Cashie River Center). A performance by the White Oak Band closed out the first day of activities.

Sunday’s highlight was the Choral Evensong by the Schola Cantorum of the Episcopal Diocese of East Carolina performed at historic St. Thomas Episcopal Church, just as it was done in the 18th century.

Fifth House District Representative Howard Hunter III read a proclamation to the town from the North Carolina General Assembly. There were others from U.S. Senators Richard Burr and Tom Tillis; and, a special one from President Donald J. Trump.

“For 250 years, the town of Windsor has contributed to the unique American story of freedom and democracy,” read the President’s proclamation. “I’m grateful to your community’s enduring spirit which strengthens our nation, honors our past, and ensures the promise of American greatness for future generations.”

Adorned in period attire, Hoggard touched on the weather‘s significance at this particular location. 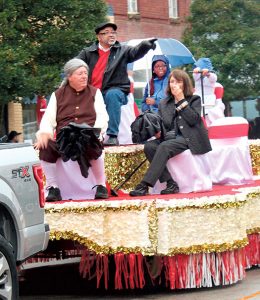 The Town of Windsor float was one of many that were part of the 250th Celebration parade that went on despite a light drizzle and overcast skies.

“A little bit of water won’t affect us, because we’ve all seen about three or four feet of water right where we’re standing; and we’ve got scars to prove that,” Hoggard stressed.

Special guest speakers – veterans all, and each with a connection to Windsor and Bertie County – shared the main stage along with Miss North Carolina Laura Matrazzo.

Retired Brigadier General David L. Jennette, Jr. read the names of “the unsung heroes” who came from the town of Windsor.

“As we express our gratitude, we should never forget that the highest appreciation we can give a veteran is not to utter words, but simply to live by them,” Jennette spoke, evoking the late President John F. Kennedy. “We honor those who have served, because security doesn’t just happen; it demands effort, sacrifice, courage, and commitment.”

“We stand on the shoulders of giants,” said Retired US Air Force Colonel Brian S. Davis, another Windsor native. “(People who) come from right here; your moms and dads, your grandfathers, sons and daughters; the maps that are spread all across this nation. It’s not our weapons or technology, it’s our people.”

“I’ve learned that these two celebrations are not mutually exclusive,” Matrazzo said. “This town has a rich military culture; and what makes me proud to be a North Carolinian is knowing that in small communities, it’s not just the large military installations, but it’s everywhere. I am honored to represent all of you.”

A ‘veterans-themed’ parade downtown, stretching much of the length of King Street, followed as over 100 persons lined the street to witness military displays as well as the full Jr. ROTC cadet corps of Bertie High School led by Sgt. Randy Cherry.

The celebration was topped off – literally – with the 250 Anniversary birthday cake baked as beautifully adorned and decorated by Lace and Cakes of Merry Hill, was moved from Town Hall to the Cashie River Center due to the weather. 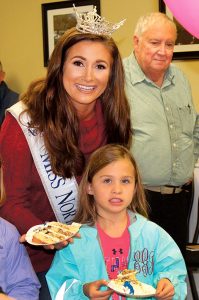 Miss North Carolina, Laura Matrazzo of Chapel Hill, poses with a young admirer at the Roanoke-Cashie River Center. The pair had sampled the special Windsor 250 Celebration cake prepared by Lace and Cakes of Merry Hill.

Once there, as saxophone musician Doc Collier played a rendition of ‘Happy Birthday’ dedicated to the town, Matrazzo cut the first piece of the multi-layer confection, which was then distributed to those who attended.

The only damper to the celebration was the inclement weather forced cancellation of an evening fireworks display planned to cap off the festivities. It will be rescheduled for a later date, according to organizers.

“It goes back to the sense of community,” said the mayor in conclusion. “There was a sense of cohesiveness because there were some things back in those (early) days that were a way of life. Some things have changed, our doctors, preachers, school teachers, businessmen, and others, but most of them still exist here today,” he noted.

WINDSOR – Three men have been arrested following shots fired into a home on Early Station Road in Aulander according... read more