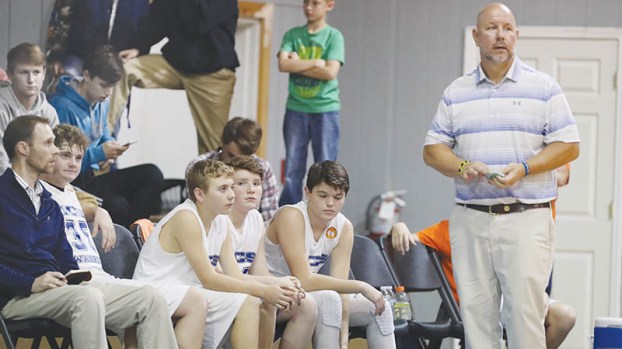 Both teams had won on Friday night in relatively high-scoring contests. Lawrence dispatched New Bern Christian 40-24, while ACS powered past The Albemarle School, 49-17.

Lindsey Smith opened the scoring for LAW in Saturday’s title tilt with a put back for a 2-0 Lawrence lead. But Ahoskie Christian struck their first points on a field goal from Madison Blowe, who later added a free 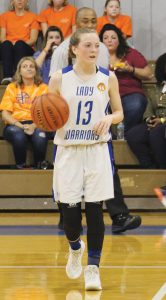 throw, and a 3-2 advantage. Smith tallied another bucket in the quarter before Cameron Wallace drained a long jump shot for a 5-4 ACS lead after one period of play.

A Wallace free throw gave the Lady Warriors in blue a two-point lead, 6-4, before Lawrence ‘s Lady Warriors in green tied the score at 6-6 en route to scoring five in a row, courtesy a pair of driving layups by Lauren Baker. Wallace drained two foul shots of her own, getting ACS within one before another Baker free throw had it 10-8, Lawrence. With time winding down, Wallace launched a long three-point shot, good just before the buzzer and Ahoskie Christian went to the mid-break leading by a point, 11-10.

Poor shooting plagued both teams in the third quarter. Lawrence only managed five points, with four for the host team. That left the score knotted at 15-15 headed to the final frame.

Baker opened the fourth quarter draining a pair of free throws for a 17-15 Lawrence advantage, but it would be the Lady Warriors last lead. The final six and a half minutes was all Ahoskie Christian as Wallace outside, and Blowe inside, took over. The pair’s 11-0 run to close out the game gave the home team the title in their first try.

“It feels good to win this tournament,” said ACS coach Kelly Perry. “We made the shots in the fourth quarter and Lawrence had some turnovers which allowed us to go on to the win.”