The School Safety discussion (above and below) included focus groups on topics ranging from bullying, characteristics school leaders should look out for in students; and responses to student trauma in a school crisis. These were led by law enforcement, psychiatrists, emergency management personnel, and citizen safety advisors. | Staff Photos by Gene Motley

WINDSOR – It’s a concern that echoes across the district, and beyond.

There’s the school shooting in Matthews, outside Charlotte; then, there were the five children killed waiting for a school bus across the country.

Nine months since the massacre at a school in Parkland, Fla., has seen everything from a Presidential Commission on School Safety to schools embracing expensive and sometimes controversial safety measures like arming teachers.

A clarion call to avoid scenarios such as these are what prompted Bertie County Schools’ superintendent Dr. Catherine Edmonds to recently hold “A Regional Discussion Around School Safety” at Bertie High School.

“We have a great collaboration within our county, with our County Commissioners, Emergency Management, the Sheriff’s Office, and everyone working so well together,” Edmonds said. “Now we need to have conversation outside of Bertie to see what our neighbors are doing and to get a national and state perspective of what’s going on.”

Among the invitees and speakers were 1st District U.S. Congressman G.K. Butterfield and Darryl Childers, Policy Advisor to Governor Roy Cooper. From law enforcement there was not only Bertie Sheriff John Holley, but also members of the North Carolina Highway Patrol, the State Bureau of Investigation (SBI), school resource officers, and Vidant Bertie Hospital Security. Also, there were members of the citizen community such as the NC Chapter of Moms Demand Action for Gun Sense, and North Carolinians Against Gun Violence. 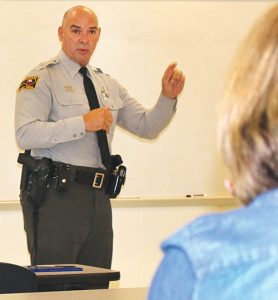 “What we’re trying to work on is tough,” said Holley. “I’ve already talked with the Superintendent that we need to have the staff involved; because what we practice is what’s going to happen if the real thing ever comes down. It’s not ‘if’, but ‘when’.”

“Planning is the key,” said Bertie County Emergency Services Director Mitch Cooper. “If we don’t plan, we are preparing ourselves to fail.”

Cooper explained that Bertie County is rural, large in land mass, and with a population of about 19,000.

“We are not your Wakes, Orange, and Durham counties,” he said. “We must use our resources intelligently. All stakeholders have to be a link in the chain and a spoke in the wheel; and when tragedy strikes, everything has got to turn together.”

Part of that planning, the EMS Director revealed, is the receipt of a $10,000 grant to conduct an active shooter training session at Bertie High School later this school year.

Butterfield spoke to citizen and constituent feedback, noting that those in power must not just speak, but also must listen. He advocated for the banning of assault weapons and high capacity magazines.

“We need to give law enforcement additional resources to prevent and prosecute gun crimes,” Butterfield stated. “We need to provide funding for executive training for law enforcement, first responders, school officials, and others to respond effectively to an active shooter.”

Butterfield also said more funding is needed for the Centers for Disease Control and the National Institutes of Health to conduct research on gun violence prevention.

“Like everyone here, I believe we need to make our schools safer,” he acknowledged. “We just have to have the will to make it happen by providing those resources.”

Butterfield emphasized keeping guns out of the hands of individuals with serious mental illness.

“Not the casual hunter, not those who keep guns for protection, but those we can identify early and help them get the treatment they need before dangerous situations develop,” he said.

In closing, Butterfield said citizens should make their feelings known to elected officials.

“The key is averting crisis before it happens because we are all stakeholders,” said Butterfield. “And we have a lot to do. I challenge you to pay attention to what is happening in Raleigh and Washington; and communicate with me and your elected officials about your needs, concerns, fears and dreams.”

Childers’ remarks pretty much echoed the Congressman; and added, ‘See something, and say something.’

The state Policy Advisor re-iterated the key points of Governor Roy Cooper’s Policy Priorities with regard to school safety.

Among the ideas: background checks should be required, a ban on military-style assault weapons that could be used in the street, additional resources provided to law enforcement, including more effective training and funding provided to the Center for Disease Control to research gun violence prevention.

“We want to get those people the help they need so they are no longer a threat,” Childers noted. “But we also want to make clear that we don’t feel these are the people who are perpetrating the violence.”

“It allows us to see the warning signs for someone who may be having a mental health crisis and advises them on how to help that person. Helping those persons is vital,” he stated.

Childers says North Carolina Department of Public Safety Director Erik Hooks has been instrumental in creating and working with the Special Committee on school safety which has been meeting and working to increase training for school resource officers, and using the new technology to enhance safety programs in schools.

“But most important, we want to hear from you,” he emphasized.

State Bureau of Investigation agents Jody Marks and Tiffany Cohn spoke about the NC Information and Sharing Center (ISAAC), the 12-year old center in Raleigh that develops intelligence on possible threats and shares that information with first responders, the private sector, emergency management, and state, federal and local partners in order to enhance homeland security.

A new part of ISAAC is the Behavioral Threat Assessment (BeTA) program which addresses ways to prevent school violence.

“It’s not just in North Carolina, but we’re a proactive unit all across the country,” Marks added.

The agents also pointed out that most tragedies at schools are planned well in advance; and these actions are thought about and built up over time.

Following the general session, attendees filed out of the auditorium where they participated in 20 ‘break-out sessions’ on topics ranging from bullying; the social-emotional characteristics that school leaders should be on the lookout for in students; and, responding to student trauma in a school crisis. These were conducted by a host of experts in various fields that are affected when crises occur on school campuses.

“I think we broadened the conversation outside the lines of Bertie County by hearing what our neighbors are doing, and we gained a perspective of what’s going on,” Edmonds said at the close of the session. “Our faculty members got a chance to see what’s available, but we still have a long way to go.”