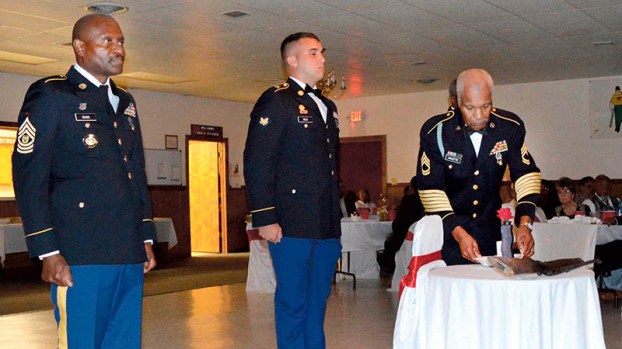 A simple thanks…sometimes that’s all it takes

The famous Saber 7 (1), Eason’s musical bear and side-kick, burst into song with Lee Greenwood’s, “Proud to Be an American.” The bear was Eason’s lucky rabbit’s foot or four leaf clover. He went everywhere with him, his tours of duty, and stayed in his backpack on numerous combat missions.

Eason commented, “He had my back. He even had episodes of PTSD same as me. We went through a lot together.”

Leon Murphy delivered the Scripture/Invocation. Eason invited everyone to partake of the delightful catered dinner prepared by B & B “Home Cookin” Catering. 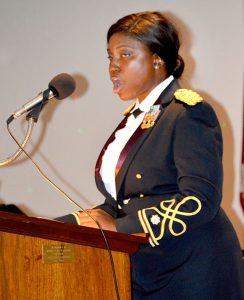 LTC Janet N. Vaughn served as the keynote speaker at the Military Ball.

After dinner, the Special Tribute to Fallen Comrades was performed. The ceremony is full of symbolism to honor soldiers who didn’t return home.

The ceremony begins with an empty table symbolizing soldiers missing from our midst. The white tablecloth symbolizes the purity of their motives when answering the call of duty. A rifle, presented by PFC Tyler Villa, symbolizes the first to die in the Revolutionary War. A chair presented by SSG Mailon Daye symbolizes the parents and grandparents who waited for over 292,000 Americans who would not return from World Wars I and II. A rose, presented by CSM Lester Deans, represented the soldier’s hopes and dreams of peace who died during the Korean War. The bread plate with a coating of salt, a slice of lemon and an empty wineglass were presented by FFC Stanley Majette. The salt and lemon slice on the plate reminds us of the bitter fate of captured and missing comrades during the Vietnam War. The inverted wineglass represents ones lost, absent and unable to share this evening’s toast. SGG Robert Joyner presented the yellow ribbon, which symbolizes the hopes and dreams of thousands of families and friends who waited for their loved ones safe return.

Over 50,000 served in Operation Desert Sheild/Desert Storm. The hopes and prayers for 246 went unanswered.

“This serves to remind us of the ultimate sacrifice our fallen comrades and families made to preserve our freedom,” concluded Eason.

SGT Gaines, the bugler, commanded the detail to present arms. He then blew taps.

LTC Janet N. Vaughn, who flew in from Fort Hood in Texas, was the keynote speaker.

Vaughn is a social worker specializing in the military combat soldier. Being in harm’s way she has personal experience to aid in her understanding and treatment regiment. She mentioned PTSD, coping with disabilities, re-socializing soldiers to civilian life after the military.

She challenged everyone to acknowledge the veterans, give a helping hand, talk or listen and thanking them for their service. Sometimes a simple thanks will do.

Eason thanked Vaughn and turned the floor over for comments. SGT Gaines stood, saying, “I remember in basic training memorizing the Preamble of the Constitution.” He began, “We the People of the United States, in Order to form a more perfect Union, establish Justice, insure domestic Tranquility, provide for the common defense, promote the general Welfare, and secure the Blessings of Liberty to ourselves and our Posterity, do ordain and establish this Constitution for the United States of America.”

A nurse at Vidant stood up and talked about soldiers and veterans and their vast array of needs.

Shreider’s loss of his wife created a void. He had filled out several applications to join the VFW but didn’t get a response. The void and depression was so bad he considered committing suicide. He decided to try the VFW again. He talked with Eason who asked him to fill out another application. Eason promised to get to the bottom of it. Eason took the time to listen, access the situation resulting in gaining a happy fulfilled VFW member and not a suicide situation.

Cynthia Savoy, who serves as the Veterans Service Officer at the VFW Post that Shreider joined, said, “Veterans’ benefits are constantly changing. Update your Veterans’ benefit packages at least every five years.”

A mother of a young soldier stationed in Iraq spoke next with a tear filled voice. “My son would tell me he was going on a mission. No big deal he would say. He would see no danger.”

There were words of encouragement from others to hear at this point.

After time for reflection, Eason invited everyone to participate in the photography session, the awards and recognition ceremony, and dancing.

Eason promised SSG Albert Ridley, a local resident, to help volunteer some of his time to veterans in this area before his Iraq deployment. Ridley attended the military ball through its ninth year until health problems prevented him from coming. He passed away earlier this year.

Earlier, Eason stated with pride that on July 24, 2018 he was promoted from commander to All-American Commander at the Veterans of Foreign Wars National Convention held in Kansas City, MO.

This was followed by a huge oorah!

AHOSKIE – The second production of the 2018/ 2019 Gallery Theatre season is the side splitting comedy called The Foreigner.... read more