Northeast-Hobgood Academy shook off a loss to Halifax Academy just two weeks ago and this time even went into the Vikings’ house and repeated as NC Independent Schools Athletic Association 1A champs of 8-Man football.

Unlike last year’s one-point win, this time the Eagles made a statement with a 40-18 victory. Rallying with 28 unanswered second-half points, Northeast-Hobgood avenged their only loss of the season, while handing the Vikings their lone setback of the year. Both teams finished their seasons at 8-1.

Despite playing on their own field, Halifax went three-and-out on their opening series and punted to NHA. 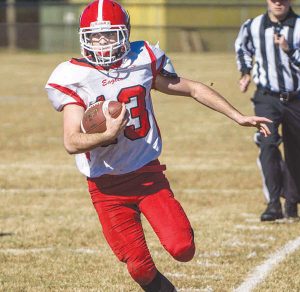 Northeast-Hobgood running back J.T. Simmons scores one of his two touchdowns in the NCISAA 1A 8-Man Football championship game against Halifax Academy, won by NHA 40-18. Simmons, who was named All-State, finished with 181 rushing yards. | A.A. Imaging / Andre Alfred

The Eagles then drove 74 yards in 12 plays. During the drive, Rowe ripped off a 22-yard run, and then capped it off with a one-yard quarterback sneak. It was 6-0, NHA, with 4:44 left in the first quarter.

Halifax was then stopped on their next series on fourth down by the Eagles’ defense and NHA took over on their own 43 yard line. On the very first play, Simmons barreled through the Vikings’ defense 57 yards to paydirt to make it 12-0 with 3:24 left in the first. The Eagles had scored two touchdowns in just under a minute and a half.

However, there was little time to rest on that quick start. Halifax re-grouped and scored the next three touchdowns. First, they scored on back-to-back possessions to tie the game at 12-all; and then with 1:49 left before halftime, they scored their next touchdown to lead 18-12 at the mid-break.

But that would be all the scoring the Eagles would allow.

NHA took the second half kickoff, but were stopped and punted. Halifax then went on a long drive, eating up time on the clock, but the Eagle defense held and they were stopped on the NHA 12-yard line going for it on fourth down.

The Eagles then went 88 yards to tie the game. Rowe then executed his first scoring strike when he successfully passed to Josh Simmons on a fly pattern, good for 44 yards to the end zone, and the game was all square once again at 18-18.

On the next Halifax possession, NHA’s Alex White recovered a fumble on the second play of the drive on the Halifax 49-yard line and the Eagles turned it into points. Rowe then struck for his second touchdown toss of the afternoon when he hit Zy Matthewson on a go-route and that made it 24-18 as the Eagles went back in front.

Halifax’s next drive started at the end of the third quarter; so early in the fourth period, on that same possession, the Vikes were stopped on an incompletion.

NHA took over, and on the first play, J.T. Simmons this time sprinted 55 yards for a score the first time he touched the ball on this drive, and that made the score 30-18. Rowe then passed to Josh Simmons for the first successful Eagles’ two-point conversion and it was 32-18, NHA, with 10:52 remaining in the game.

Now it was NHA’s turn to eat up some clock as they very methodically drove from near-midfield to the Vikings 31-yard line where Rowe threw his final touchdown strike of the day: hitting Justin Jones with a score to make it 38-18. Josh Simmons ran in NHA’s second and final two-point conversion for the 22-point margin and the Eagles’ 39th and 40th points.

All that remained for Halifax was to try to get into the end zone at least one time in the second half. Instead, Northeast-Hobgood stopped them once more – or, more specifically, the clock did – as time ran out their last chance, erupting in a wild celebration for the NHA players and fans.

“Give credit to our ‘9th-man’,” said Northeast athletic director Joella Brown. “We had a large and vocal crowd and that was a lot of inspiration to our players.”

“I was really happy with our defense,” said NHA defensive head coach Craig Ellison. “I’m glad we were able to figure out their isolation play they used on us in the first game. We also challenged them at halftime and I was very pleased with how we responded, especially shutting them out in the second half.”

Northeast-Hobgood almost cracked the 400-yard mark on offense with a 398 total. Halifax finished with 286 yards.

Area members of the All-State team were: Simmons from NHA; Eli Harris of Halifax, and Cody Dunk from Bethel Christian.

GATESVILLE – They stormed onto the field under a night sky filled with booming pyrotechnics. Those fireworks served as an... read more