WINTON – One suspect was arrested while another slipped away here Friday after they attempted to deliver illegal contraband to inmates at Rivers Correctional Institution (RCI).

That contraband, opened by three Rivers Correctional employees after being found on the grounds of the privately-owned prison, caused the trio to become ill.

“They opened the package in a secured room inside the prison at which time a white, powdery substance came out,” Hayes said. “They complained of numbness to their face and lips.”

That prompted a call to Hertford County EMS to come to the prison to provide medical assistance to the three employees.

“Two of our county EMTs arrived, and both were also affected through secondary exposure to whatever was in that package,” Hayes reported. 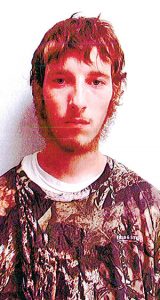 He said all five were taken to Vidant Roanoke-Chowan Hospital for treatment.

Meanwhile, to determine what type of substance was in the package, Hayes said he summoned a HazMat team along with the SBI’s Clandestine Lab Response Team. They were on the scene later in the afternoon on Friday.

Hayes said his office received a call around 9:30 am on Friday from Rivers Correctional regarding a large package being thrown over the fence. He added that the package contained cell phones, some marijuana, and the unknown substance that caused the medical emergency. The Sheriff said the package also contained another unknown item. He described it as “a brown, sticky substance.”

“We were able to track two known suspects into a wooded area near the prison,” Hayes said. “Using K-9 tracking dogs on the ground and a drone overhead, we located the first suspect at around 1:15 pm. He was about 200 yards from the prison in heavy brush.

“We called off the search for the other at around 4:30 pm after the dogs lost the scent along the banks of the Potecasi Creek,” Hayes added.

The search resumed Saturday, but with no results.

The suspect apprehended Friday was 20-year-old Justin Daniel MacDonald of Cameron, NC (located in Moore County, northwest of Fayetteville). He was charged with providing contraband to an inmate, a felony.

MacDonald was placed in the Hertford County Jail under a $500,000 secured bond. He was scheduled to make his initial court appearance on Tuesday.

“Mr. MacDonald did not cooperate with my investigators as he did not offer the name of the second individual we were seeking,” Hayes said. “And we do believe a third individual was involved. Since we did not locate a suspect vehicle parked near the prison, we believe a third person dropped off the two men and was to rendezvous with them at a later time. We believe once we had deputies on the scene and conducting frequent patrols of the area during our search, the suspect vehicle left the area and did not return.”

“We thank them for their assistance; as well as thanking a local citizen who provided the drone to use in our search,” Hayes stated.

As far as the unknown substances found in the package, Hayes said they were seized by the SBI and taken to the State Crime Lab in Raleigh for testing.

“They did perform a field test on the white, powdery substance and whatever it was it did not contain any life-threatening material,” Hayes said. “That’s good news for the Rivers Correctional employees and our two EMTs.”

Hayes added that once the substances are identified, additional charges could possibly be lodged against MacDonald.

WINTON – October was Domestic Violence Awareness Month, and a part of combatting this form of abuse is to teach... read more