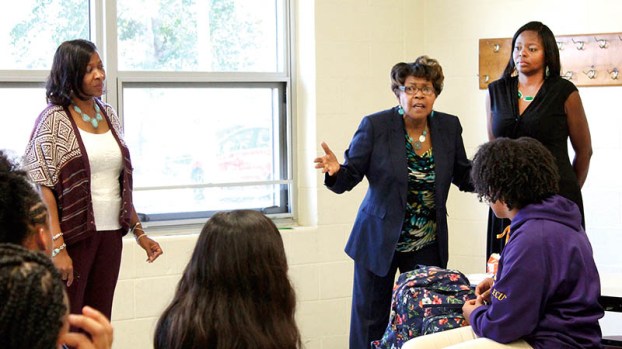 WINTON – October was Domestic Violence Awareness Month, and a part of combatting this form of abuse is to teach good habits early on in young people. Students at C.S. Brown STEM High School participated in an educational discussion on healthy dating relationships here on Oct. 30.

The session was facilitated by the school’s counselor Teresa Watford, along with Blannie Hunt, the Community Outreach Coordinator for Roanoke Chowan S.A.F.E. and Dr. Lakeisha Walker, counselor at Bridge of Hope Life Transformational Services. The three answered questions, gave advice, and encouraged the students to discuss different issues they may face.

There were two sessions held; one for girls only and another one for boys only. But the messages in both discussions were similar.

“Love yourself. Respect yourself,” said Hunt. “These are your golden years.”

There was a strong emphasis on getting out of and staying away from bad relationships. Some red flags for these relationships include disrespectful language, controlling behaviors, and physical violence.

Dr. Walker said she had seen many young people get too involved in relationships and then are devasted when they end. She reminded them all that it’s better to be single or move on to a healthier relationship than to stay in an abusive one.

“Is this where I want to be? Is this going to have any type of future?” she continued by mentioning a few questions to consider if a relationship is abusive. “You (should) never give people permission to hurt you. You (should) never settle for less than you deserve.”

During the girls’ lively discussion, they talked about different dating scenarios such as how to react if their boyfriend is approached by another girl. They also focused on consent and protecting themselves from date rape situations.

“Be mindful of the choices you make,” Watford chimed in with advice for her students as well.

Much of the boys’ discussion centered on considering the consequences of their actions. With her years as a court advocate, Hunt explained she had seen many young men suffer because they made poor choices.

“Don’t act on everything you feel,” she cautioned.

Dr. Walker added to the discussion by urging the boys to manage their emotions, saying “if you ever want to put your hands on a woman, you need to check yourself and ask ‘why am I so angry?’”

The boys participated by asking many different questions, including what to do if they end up being the victim of abuse in a relationship.

Like the girls, the boys also discussed the importance of consent and why they should avoid forming promiscuous habits. Respecting yourself and also the other person, they agreed, were vital for healthy dating relationships.

In both groups there was an emphasis on making good choices.

“Get all the education that you can because it gives you choices,” said Walker, passing on advice she’d received when she was younger.

“We all make choices. You’ve got to make the choice for yourself,” Hunt concluded.

Even though the month dedicated to domestic violence prevention is now over, it’s never too late to start discussing these issues with young people and letting them continue the conversation.

One jailed, another sought for attempting to deliver contraband to private prison

WINTON – The search has been called off tonight (Friday) for a second suspect involved in attempting to deliver illegal... read more