CONWAY, NC – Mary Frances Futrell, 78, passed away peacefully on Tuesday, October 30, 2018 at Ahoskie House while holding the hand of her faithful and dedicated husband of 57 years, Melvin King Futrell.

Born on October 16, 1940 and raised in Early Station in Hertford County, she later married and moved to her home in Conway, NC in 1961 where she resided for many years.

She retried as the lead Accounts Receivable Clerk for Eastern Fuels after many years of service. She was a faithful member of Ashley’s Grove Baptist Church where she served in many roles from the finance committee, lead for Vacation Bible School, and sang in the choir for many years. She enjoyed singing with her husband and loving friends for years in the Stagecoach Pioneer’s band where they traveled to bring joy to many local nursing home residents. Most importantly, she was a wife, loving mother, Nana, and good friend to many in her community. 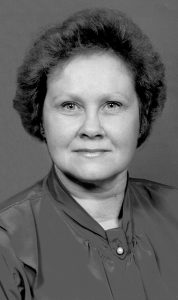 Frances was preceded in her death by her parents, Ross Joseph and Velner Cooke Nichols; brothers, Curtis Nichols and Fred Nichols; and her sister Linda Nichols.

The family will be receiving friends at the home of Melvin Futrell.

A private burial was held on Friday, November 2 followed by a memorial service at Ashley’s Grove Baptist Church with Reverend David Ross officiating.

Bridgers Funeral Home, Inc in Conway handled the arrangements. Online condolences may be shared with the family at www.bridgersfuneralhome.com.