GATESVILLE – They stormed onto the field under a night sky filled with booming pyrotechnics.

Those fireworks served as an omen of things to come.

Celebrating Senior Night, Gates County High School closed out its regular season home schedule in a big way with a 58-0 rout of Camden County here Thursday in a game moved up 24 hours due to an expected weather washout on Friday.

In the process, the Red Barons (8-2 overall; 4-1 in the Albemarle Conference) wrapped up second place in the league standings heading into the state play-offs that begin Nov. 16. GCHS also kept its streak of home wins alive at 6-0.

All totaled, Gates County finished with 408 yards of total offense. Five players scored rushing touchdowns, including two from reserve running back Nasir Jones, while quarterback Jawan Riddick threw for a pair of scores. 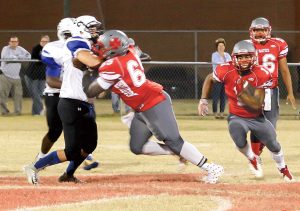 Photo by Charles Revelle
Da’Quan Drake (right) blasts through a hole, helped created by a block from teammate Daniel Holand (#65), and rambled 51 yards for a touchdown on Gates County’s first offensive snap during Thursday night’s home game vs. Camden County. The Red Barons scored early and often as they buried the Bruins, 58-0.

Special teams play also factored into the win as Ty’rell Holley returned a punt 46 yards for a touchdown and reserve Pierre Holley recovered a Camden fumble following a kick-off to set-up a score.

Defensively, GCHS surrendered only 116 total yards (71 rushing; 45 passing). That effort was led by seven tackles each by Rayvon Riddick and Dustin McConnell. Holley, Adonis White, and Jordan Robinson each had an interception.

As it turned out, Gates County scored enough points to win the game on their very first offensive snap. That came after White’s interception set the table for the offense at their own 49 yardline. On first down from that point, Da’Quan Drake took the hand-off and blasted through a huge hole over the left side of the line en route to a 51-yard TD scamper. The PAT kick failed, but GCHS held an early 6-0 lead at the 9:33 mark of the opening quarter.

The fireworks spilled over in the second period where the Red Barons ran only nine offensive plays and scored three times. Jones had the first of those scores on a 12-yard run that capped a five-play, 48-yard drive.

Aided by a personal foul flag against the ‘Barons, Camden nearly reached midfield on the game’s ensuing series. However, Robinson ended that opportunity for the visiting Bruins when he made a diving interception at his own 26 yardline.

One snap later, Greg Crandol took the hand-off, hit another big hole off the left side and was off to the races….74 yards for a TD. Crandol was the game’s leading rusher with 136 yards on just seven carries, all in the first half.

T. Holley rounded out the first half scoring with a nine-yard TD run with four seconds left in the third quarter to help the Red Barons build a 46-0 lead at intermission.

With a running clock in the second half (due to the lopsided score), GCHS coach Matt Biggy emptied his bench as second and third-team players saw action on both sides of the ball.

The Red Barons received the kick-off to open the third quarter and promptly set sail on an 11-play, 51-yard drive capped by a 2-yard TD run by Jones.

Camden fumbled away the ensuing kick-off, setting up a two-play, 13-yard drive that ended on the first snap of the fourth quarter with a 2-yard TD run by Kenyell Ballard that accounted for the 58-0 finale.

Gates County will close out its regular season with a Nov. 9 road trip to Southeast Halifax High School. That game was postponed earlier this season by Hurricane Florence.