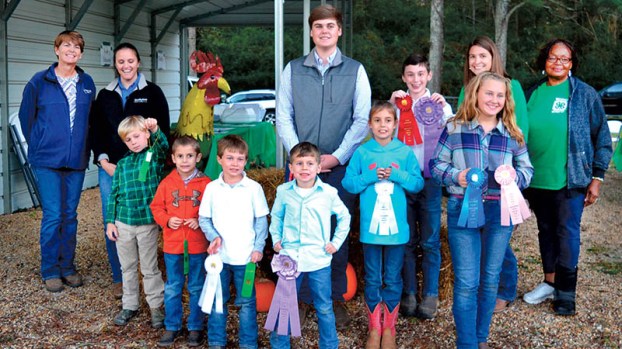 Winners of the Cloverbuds and Junior divisions of the Poultry Show are shown with judge Zachery Keeter (center) and local and area 4-H officials. | Photos by Danny Bowman Jr.

Birds of a feather flock together

There was plenty to do such as getting a good look at each pullet or female chicken, socialize, eat popcorn or candied apples, or enjoy the train ride (a riding lawn mower pulling four, cut in half 55 gallon barrels which were made into cars) or playing cornhole.

There was a huge poster with an egg to look at and learn the many parts of the incredible edible egg. The poster also shared information on egg fertilization, incubation, and the hatching of the baby chicks.

Another interactive poster showed a chicken that included labels that children and adults could try their hand at labeling. A line was drawn to the parts of the chicken that were to be examined during the judging in the show. Examples were the comb, beak and wattle with velcro labels to attach to the correct external anatomical parts. 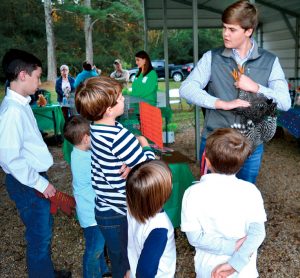 The Cloverbuds were up first for the showmanship part of the event. No stranger to conducting a poultry show, Keeter spent time with each contestant asking various questions to test their knowledge. These included the watering and feeding schedules and identifying some parts of the bird.  He put each contestant at ease with his calm and easygoing demeanor.

They were also judged on their relationship with their chicken that included bonding and trust with each other. This was put to the test when removing the bird from its cage, carrying it and placing it on the exhibit table. The children gave pats and rubs to the chicken’s back to reassure it of its safety and security.

“A big smile goes a long way in the showmanship evaluation,” said Keeter.

The juniors followed. Being older, questions were a little tougher.

As Keeter pointed out, it is important to expose children to the farm experience to develop an interest by involvement in 4-H. Raising a three-day-old chick to a laying hen is quite an accomplishment for these youngsters. He then examined each bird by checking the overall look, health and feather development. He was able to feel to determine the bird’s ability to mature and lay large eggs.

“Sara Villnock, an extension agent, who works with 4-H youth development and I headed up this show,” stated Beth Buchell.

This event actually began with seven incubated eggs, which hatched into these young pullet contestants. The seven children received their three-day-old chicks in mid-May.

The participants were required to attend four different workshops which covered the care of the chick, feeding, watering, housing and learning to handle them.  They also had to learn the parts of the pullet that were tested at the show. The workshops covered all of the information needed to raise the chicks until this point in time.

Burchell is an Extension agent specializing in agriculture and livestock. She works at the Edgecombe County Center. She wished to thank Jackson’s Futrell Pharmacy, Tractor Supply Co., Adams Lawn and Landscapes, Chick-fil-A and Valley Community Church, all of Roanoke Rapids, as this year’s show sponsors.

Each participant received a gift bag filled with goodies from the sponsors.