AHOSKIE – Two second half touchdowns proved to be the difference here Thursday night as Hertford County upped their playoff seeding chances at the expense of rival Bertie when the Bears claimed a 30-8 home victory.

The game had been close (tied 8-8 at halftime) before a wildcat option play by Jalen Davis ended up a 43-yard touchdown scamper that ended up breaking the backs of the Falcons.

“Just a heckuva game,” said an exhausted Hertford County coach Terrance Saxby. “Hats off to Bertie, because they gave us all we could handle.”

Bertie opened the game with a long drive from midfield down to the one-yard line. But the Bears defense stiffened – maybe too much – as tempers flared in the red zone ending with a short on-field melee that resulted in several Hertford County player ejections.  But it may have inspired the Bears’ resolve, because the Falcons were driven back and finally stopped on fourth-down at the ten-yard line. 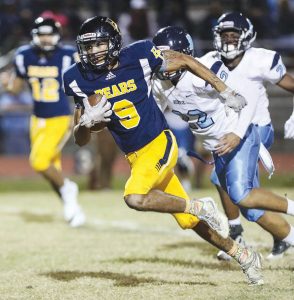 Hertford County’s Jalen Davis (#9) scores the game-clinching touchdown in Thursday night’s Northeastern Coastal Conference rivalry game between the Bears and Bertie. Hertford County claimed a 30-8 win over the Falcons for their fifth win of the season. | William Anthony Photography

yards to the end zone for the games first score. A Chris Cooper two-point conversion run had the Falcons in front, 8-0, at 3:06 in the first quarter.

Bertie then recovered an onside kick, but went nowhere as Orrin Gatling intercepted Falcon quarterback Brayden Hair on the second play with the first of what would be four picks the young Falcon signal-caller surrendered on the night.  The Bears then had a short trip – 24 yards – to the end zone as Tye Saxby threw a five-yard scoring strike to Anron Bond. A two-point conversion pass to Jalen Davis became the equalizer that made the score 8-8 early in the second quarter.

The rest of the period was a stalemate and neither team mounted a successful scoring drive thanks to turnovers and the teams headed to the locker-room all knotted at 8-apiece.

The Bears took their first lead on the second play of the second half when Hair was picked by Michale Cooper, who returned it 57 yards to the end zone.  The conversion failed, but Hertford County was in command now, 14-8.

The mistake-prone contest continued until coach Saxby called the wildcat play in the fourth quarter and Davis weaved his way through defenders to paydirt. This time the conversion – a quarterback Saxby pass to Holley – worked for a 22-8 Hertford County lead

With Bertie’s defense spent and their offense ineffective, the Bears added one last garbage-time touchdown with 1:15 left in the game as Amajhea Smallwood made a four-yard touchdown run and he also ran in the conversion.

“Brayden did what we asked of him in executing the game plan,” said Bertie coach Grantley Mizelle of the young quarterback who was filling in for the suspended Isaiah Williams. “And, our defense played well all night.”

WINSTON-SALEM – One of the most successful tennis seasons in Northeast Academy history came to an end Saturday at the... read more