Next to last chance

For some teams, their Week-12 games will be the final weekend of the regular season, while some teams still have work to do. After a promising opening, Bertie has lost two in a row for the first time this season and must fight for their playoff lives against a resurgent Hertford County. Gates County can wrap up second-place in the Albemarle Conference with a win, while Northampton continues to cruise in their league.

“We came out and played really well defensively and our passing game came along offensively,” said Bears 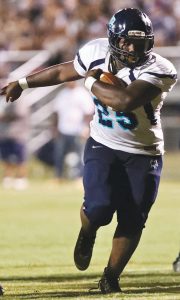 “Bertie is very well coached,” Saxby continued. “They have a strong running game and big, athletic receivers. They also have a good quarterback and a good defense.”

“We will have to tackle well on defense and execute on offense and everybody should be back for us injury-wise,” the coach concluded.

Meanwhile, Bertie did something it hadn’t done all season: lose two games in a row.

“We had a lot of adversity, but we fought to the end and it was a tough loss,” said Falcons coach Grantley Mizelle.

“Hertford County is much improved from early in the season,” closed Mizelle. “They’ve gotten better each week; they have a good quarterback, and their defense is aggressive. We have to control the clock and not let the emotion of a rivalry game get to us.”

“Camden is winless and they are struggling. But they are playing hard and lost a close game to Perquimans last week,” Biggy added.

“We have to continue to execute on offense,” he concluded. “We need to run the ball and defensively we have to make tackles in our final conference game.”

“We got an early lead and we played well offensively and defensively,” said Jaguars coach George Privott.

“Weldon is a good team and always a battle for us,” closed Privott. “We have to play well on offense with no turnovers, and our defense needs to continue to play well.”