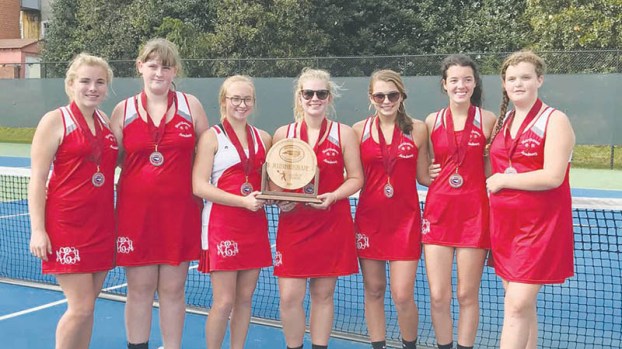 WINSTON-SALEM – One of the most successful tennis seasons in Northeast Academy history came to an end Saturday at the Salem Academy tennis courts in Winston-Salem.

It had been an unlikely climb to the Twin-Cities for the girls from Lasker. They entered the post-season with a losing mark of 7-8 before surging to a pair of big wins: 7-2 over Christ Covenant School in Jackson, then surprising rival Lawrence 6-3 in the semi-finals in Williamston.

“The girls played a very good Kerr Vance team from Henderson,” said NEA coach Joella Brown. “They (KVA) lost only one match all year, but our girls played well and never gave up, playing hard the entire match.”

The Spartans started the match with a sweep of the doubles matches. 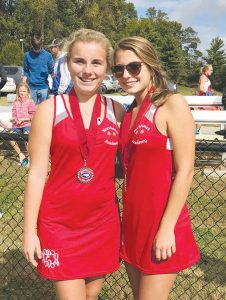 Carly Stephenson and Jessie Martin were named to the NCISAA All-State tennis team.

and Lizzie Smith, 8-1; and the second doubles squad of Carly Stepheson and Emalee Jones were downed by a similar 8-1 final. Carson Johnson and Hannah McDermott fought hard in their match before succumbing to Maggie Mooring and Leah Moseley.

Already facing an 0-3 deficit when the singles matches began, Williams continued her stellar play as she topped Martin 6-1, 5-3.

Though they needed just one more win to claim the state title, Kerr-Vance found itself still in a fight: Stephenson won her first game against Moseley 6-2, and the Eagles hoped that might spark a comeback.

However, on the other courts, Roslynn Morris fell in straight sets to Austyn Abbott, 6-0, 6-0; and, Smith fought off a first-set 6-0 shutout before she went down to Negron, 6-4. Those two wins gave Kerr-Vance (16-1) the state championship.

“In NCISAA playoffs the first team that reaches five (victories) wins,” said Brown. “All play is suspended after that.”

Jones retired on medical default to Edie Echols, while Johnson tied Mooring at five sets each (5-5) before the team match was called. Despite Smith taking her first set against Moseley, it was her Kerr-Vance opponent who won the second set, 6-4.

“We played them a month ago and played them even better this time,” said Brown. “We had a great season and we have to thank everyone for their support.”

After the match, Martin and Stephenson were named to the NCISAA All-State team, and both will return to play for Northeast next year.

“We will miss our seniors Carson and Hannah for next year,” Brown stated. “We also had two All State players in Carly and Jessie. I’m proud of them and the entire team. It was truly remarkable that we finished second in the state.

Northeast ended the year with a record of 9-9

Next to last chance

For some teams, their Week-12 games will be the final weekend of the regular season, while some teams still have... read more