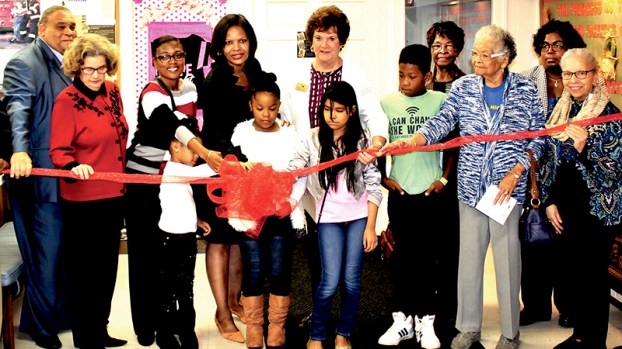 JACKSON – The history of W.S. Creecy High School stretches back over 100 years, and some parts of its legacy have faded just like old photographs. But now people have an opportunity to learn more about the former Rich Square school in a new exhibit housed at the Northampton County Memorial Library.

An opening celebration and ribbon-cutting ceremony was held at the library on Oct. 20, bringing together former teachers and students like one big school reunion. The exhibit contains numerous graduating class photos as well as teacher photos, student report cards, diplomas, athletic trophies, and much more.

“I think it almost haunted me that those (graduation) pictures had faded. I didn’t want our history to fade like the pictures that hung on the wall,” said Shelia Moses, author of “A Price Was Paid: The History of W.S. Creecy High School” as well as curator of the exhibit.

Moses worked for a long time to research and gather all the materials, receiving assistance and funding from many along the way. Though she did not actually graduate from W.S. Creecy—her junior year was the high school’s last year of operation—she said she was close to the Creecy family and she enjoys preserving history.

Several items are donated or on loan from the Creecy family, while other exhibit objects are contributed from the many students who used to walk the school’s halls each day. Moses said she received items from as far away as New Jersey.

The school was founded in 1894 under the name Rich Square Academy, and G.G. Maggett served as the first principal. The school expanded and a few more people served as principal at the school until 1911 when William S. Creecy, Sr. stepped into the role. Under his leadership, the school flourished, and in 1937 the school was renamed in his honor. After his death in 1940, his son William Spencer Creecy Jr. became principal, serving until his retirement in 1976.

The class of 1978 was the last to graduate from the high school. Afterwards, it was converted into an elementary school until it permanently closed in 2009.

“This is a very special occasion,” said Jeanne S. Moore proudly as she greeted the crowd who came to see the exhibit.

Moore graduated from the school in 1951 and then returned to teach there for several years.

During the opening celebration event, several former students and teachers shared stories about their time at the school. Moses remembered a semester where she worked as an assistant for Dr. and Mrs. Creecy during her free period. Bernard Casterlow talked about different advice he received from teachers. Ennis Williams recalled singing songs by the Temptations with his classmates.

Kimberly Scott, who currently serves as principal of Willis Hare Elementary School, said she felt like she was representing her mother, a former teacher at the school. Scott herself attended the school and credits it as a vital part to her education.

“It set my foundation for me to be able to go out and give back to the students of Northampton Public Schools,” Scott said.

Cola Eason served as the last high school principal, and some of his family members were in attendance Saturday to see the exhibit. His niece, Deborah Eason, remembered her uncle as someone passionate about educating everyone.

Class of 1972 graduate Rhonda Moses said it had been sad to see the school close, but she appreciated the opportunity to learn more about her former school as well as to reconnect with many people.

“My mom taught there for many years,” she continued. “Not only do I see my classmates and my friends and neighbors here, I see my mom’s students.”

Northampton Library Branch Manager Pam Brett expressed her excitement about the exhibit finally being open for the public to enjoy.

“I hope that the ones that were here today will spread the word and let other people know,” said Brett. “For some it might be memories. For some it’s learning about your family and your ancestors. But that’s always a wonderful experience.”

Those interested in seeing the history exhibit can visit during the library’s normal operating hours. Brett said someone at the front desk will direct visitors to the exhibit room. The Northampton Memorial Library is located at 207 W. Jefferson Street in Jackson.

The exhibit will remain at the library until February 20.

“At some point, I hope some of those archives will be sent to Raleigh so that they can be a part of North Carolina history,” explained Moses of her future goal for the exhibit.

The opening celebration concluded with a rendition of the W.S. Creecy song sung by those in attendance. As the lyrics say, “we’ll keep thy faith and always will remember thee, dear Creecy Hi, our noble school so dear.”

WINDSOR – Bertie County has joined 43 other counties in North Carolina that were added to President Donald Trump’s disaster... read more