The answer to that question can be accurately summed up in one word – positively.

Jawan Riddick threw for two scores and rushed for another; Da”Quan Drake ran for a pair of touchdowns; Ty’rell Holley returned a kick-off for a quick six points; Caleb Brickhouse booted a career-long and school record 44 yard field goal (plus was a perfect 3-for-3 on PATs); and the Red Barons defense played well as Gates County routed visiting Washington County, 45-19, here Thursday night. The game was moved up 24 hours due to Friday’s predicted bad weather. 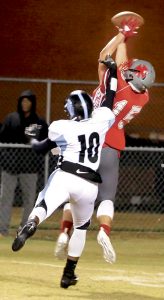 Gates County’s Ron Olsen (in red) leaps to haul in a touchdown pass, part of a big night for the Red Barons as they amassed 326 yards of offense in a 45-19 win over Washington County. Photo by Charles Revelle

While the game’s outcome may appear to be an offensive explosion for GCHS (who accounted for 326 total yards), it was actually a key defensive stop that turned the momentum.

Leading 13-7, the Red Barons were on the brink of seeing their opponent forge a tie after the Panthers used a kick-off return to midfield and then launched a drive that reached Gates County’s 10 yardline. However, from that point, GCHS stood its ground, stopping a second down run for no gain (a combined tackle by Kaleb Logan and Rayvon Riddick) followed by two off-target pass attempts.

Gates County took over on loss of downs at the 10 and proceeded to put together an offensive masterpiece – a 17 play, 90 yard drive that consumed nearly six and one-half minutes. Twice on the drive, Riddick kept it alive by connecting on a pair of 4th down passes – 9 yards to Ron Olsen and 22 yards to Holley. That helped to eventually set the table for Drake to score from three yards out, and coupled with a two-point conversion pass from Riddick to Logan, the ‘Barons held a 21-7 halftime lead.

Another key defensive stand sparked another GCHS touchdown on their second possession of the third quarter. After Washington County drove inside ‘Barons territory, Olsen – from his defensive end spot – recorded two consecutive tackles for loss; the last one being a six-yard quarterback sack on a 4th down play that allowed his team to get back on offense at their own 40 yardline.

Five plays later, Riddick polished off the 60-yard drive with his 13-yard scamper to the endzone. Brickhouse added the PAT for a 28-7 lead.

Olsen’s second sack of the night, this one resulting in an eight-yard loss, forced the Panthers to punt their next possession from deep in their territory. The punt only covered 10 yards and the ‘Barons took over at Washington County’s 25 yardline. Six plays later, Drake muscled into the endzone from one-yard out and coupled with the PAT kick from Brickhouse, the Red Barons had stretched their lead to 35-7 with 3:21 left in the third period.

Even after the Panthers answered with a nine-play scoring drive capped by a 13-yard TD run by Jshaun Webb (the PAT was blocked by Dustin McConnell) on the first snap of the fourth quarter, Gates County answered quickly when Holley returned the ensuing kick-off 89 yards for a touchdown. Cody Higginbotham added the PAT kick for a 42-13 lead.

Later in the period, Brickhouse came on after a drive stalled and booted his record-setting 44-yard field goal for a 45-13 advantage.

Webb rounded out the game’s scoring with his three-yard TD run with 4:48 left.

The visitors did claim an early lead, taking the game’s opening kick-off and driving 65 yards in 11 plays capped by a one-yard TD run by Samyr Cooper. Edwin Negrete added the PAT for a 7-0 Panthers lead at the 7:58 mark of the first quarter.

Gates County answered on the game’s ensuing possession, marching 80 yards in 10 plays highlighted by the running of Drake (who would finish with 96 rushing yards) and the arm of Riddick (9-of-17 passing for 139 yards). It was a Riddick-to-Jordan Robinson TD pass covering 10 yards that ended the drive. Brickhouse added the PAT and the game was deadlocked at 7-7 with a shade over three minutes remaining in the opening period.

Gates scored again on its next drive, which ended with Olsen making a leaping grab over a defender for a 30-yard TD pass from Riddick. The two-point conversion failed, leaving GCHS with a 13-7 lead early in the second quarter.