With three weeks left in the high school football regular season, thanks to an extra weekend of games granted by the state due to Hurricane Florence, a lot of conference races are tightening up. The challenge is not so much at the top, where teams like Northeastern, Edenton, and Northampton are comfortably in front, but for other schools vying for play-off positions. Four regional games are set for this week, three on Thursday night: Washington County at Gates County, Hertford County at Pasquotank, and Currituck at Bertie have all moved up to Thursday at 7 p.m. to avoid predicted rains for Friday. As of press-time Northeast-Hobgood will play their first-round NCISAA playoff game as scheduled on Friday. 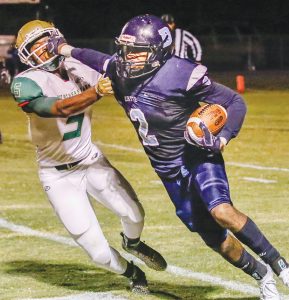 “We had a very good game,” said Bears head coach Terrance Saxby. “The kids played hard, and we had enough at the end to win. I’m proud of all of them.”

“They have a new head coach and they are trying to build a program,” added Saxby. “So we know they are going to play hard. We have to keep playing consistent, execute on offense and play good defense.”

Last Friday, despite two weeks between games, Bertie lost at home to Northeastern, 48-14.

“We didn’t play well,” said Bertie coach Grantley Mizelle. “We didn’t block or tackle and Northeastern is too good a team.”

“Currituck has a very good quarterback and they have a big offensive line,” concluded Mizelle. “They are an improved team from the past. We have to play better than last Friday; play inspired, and execute better offensive and defensive plays.”

In a game many thought would be closer, Gates County lost to Edenton Holmes 56-7 in Albemarle Athletic Conference play.

“Edenton is a very good team,” said Gates coach Matt Biggy. “We had an opportunity to score points and we didn’t.”

“This team is very athletic offensively and they have a very good quarterback,” added Biggy. “They are also very quick and they make good plays. We have to establish our running game offensively and make tackles to execute on defense.”

Last Friday Northeast-Hobgood lost their first game of the season to Halifax Academy 34-28 in a battle of unbeatens. The game was played as Homecoming at Hobgood Academy and the Eagles played a strong second half, but couldn’t catch up in time after falling behind. Top seeding in the NCISAA 1A 8-Man Football Colonial Conference post-season was on the line and the Vikings prevailed.

This Friday, the first round of the playoffs begin in Lasker as second-seed Northeast-Hobgood (6-1) hosts three-seed Bethel Christian (4-3). Number-one seed Halifax (7-0) will host four-seed Pungo Christian (3-4).

With four teams remaining these are the semi-finals, with the winners meeting for the state championship at Halifax on Nov. 3. It both NEA-Hobgood and Halifax prevail; it will be a re-match of last year’s title game.