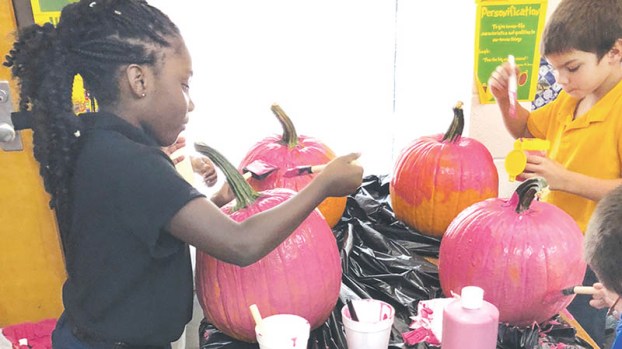 Bertie County Schools’ students recently participated in the first-ever district-wide Club Day. Every student and staff member at BCS participates in a club activity during the final hour of one school day each month. Some of the Clubs include art (as shown here) chess, and dance. | Photo courtesy of Bertie County Schools

“By popular student demand, and with the help of two talented administrative interns, every child in Bertie County Schools is officially a member of a club of his or her choosing,” said BCS Communication Specialist Amanda Bunch.

Students in grades elementary, middle and high school were able to explore areas of their particular interests and preferences for the first time. Some club creations were traditional, such as Future Farmers of America (FFA), Science Club, Art, Chess, and BETA Clubs. Other clubs included Relay for Life, Cooking Club, Dance, Women’s Empowerment and even a Fishing Club, Guitar Club and Public Speaking Club.

Staff and students alike benefitted from the chance to explore interests and come up with club names and develop them.

“The first Club Day was a great success across the district,” Bunch concluded. “It’s unclear as to whom had the most fun—the students or the staff.”

Wanda Cofield, Principal of Bertie Early College High School, commented on some of the unintentional, yet positive, results from Club Day.

“Mr. (BECHS Science Instructor, Bruce) Boller hosted a Guitar Club, and of course, he actually brought in several of his own guitars to boost the students’ interest,” Cofield said.

“Mrs. (BCS Information Technology Facilitator, Janice) Ricks and I launched the ‘In the Kitchen’ Club with the (scavenger hunt) GooseChase app,” she added. “The students grouped together to compete in bizarre missions, which required them to capture pictures as evidence.”

“And the ‘Coloring to Relieve Stress’ Club with Mrs. (Tammy) Jernigan was the best way to end a day, actually a week,” noted Cofield. “There was standing room only… and more crayons are going to be needed!”

“Just know we had a ball,” she exclaimed. “We adults needed that too.”

Alex’zandria Freeman, a sixth grader at Bertie Middle School, was in the Track Club.

“I like to run,” Freeman said. “We went outside and raced each other, and I won in the club. (BHS basketball) Coach (Derrick) Bond was the leader … I am looking forward to the next Club Day.”

“Our first Club Day was a huge success,” Colerain Elementary School principal Carol Mizelle said. “The students and staff were excited to begin the club adventure time together.”

The idea for a district-wide Club Day stemmed from the efforts of two 2018 summer administrative interns with the Bertie County Schools’ Central Services Office.

Robert Boone, now a senior at Elizabeth City State University, and Sandrika Freeman, currently a junior at the University of North Carolina at Chapel Hill, worked during the summer months to implement a Student Government Association (SGA) activity in the county school system for the 2018-19 school year.

Bertie County Schools Superintendent Dr. Catherine Edmonds first saw a need for each schools’ SGA organizations when she came to work in Bertie County back in February. Edmonds also saw the internship possibilities with the two Bertie County natives, and decided to assign the duty of developing and implementing the SGA to the two of them. Both of the former Bertie students wanted badly to work hard and to give back to their communities, while away for the summer from the stress of college life.

“It is great to go into the schools and to give students the opportunity to have a voice and to communicate more directly with administrative leaders,” Boone said in recalling his summer experience.

“Having an SGA in each school will not only give students a voice,” said Freeman as she made her presentation before the Bertie County Board of Education. “It will foster a transparent relationship between students and leaders. It will create great student leaders, which in turn, will make for better schools.”

Edmonds said it’s critical to give all stakeholders in education, especially the students, a voice when it comes to the operations and endeavors of their schools.

“This district-wide initiative is a direct result of the conversations that came about during my Superintendent’s Listening Tour,” Edmonds related. “Students expressed a desire for SGA and other clubs at their schools.”

Boone and Freeman developed a detailed plan for executing the Superintendent’s vision and it was decided that a Club Day would be designated once a month, during the last hour of the instructional day, for the SGA officers to meet and for all other students to participate in a Club of their choosing.

All SGA applications were due Sept. 10. Candidates had up to one week for campaigning on campus, and were elected by the student bodies the following week.

Club Days have been designated to be the last Friday of every month from 2:30-3:30 p.m. This allows for all students to be in a club, without worries of afterschool care and transportation issues that more traditional school clubs might have.

“Because of the newly formed SGA associations and the variety of clubs created, students are being afforded opportunities that they might not otherwise have been exposed to,” acknowledged Edmonds. “For example, students are experiencing the arts, the game of chess, and so much more.”

“From the success of the first Club Day, students and staff have truly made this once-a-month adventure into a permanent fixture of the educational experience in all of Bertie County Schools,” the Superintendent explained.

Zy’heim Craig, the SGA President of Windsor Elementary School, said that the elected officers at his school talked business in their first meeting.

“We talked about how we could raise money for our school and having a food drive for the hurricane victims,” he said.

Craig is excited about having dress-down days to raise money for PBIS (Positive Behavior Interventions and Supports) celebrations, too.

“That’s because it directs people how to behave better … and we can celebrate the people who are doing the right thing, and encourage them to do more,” said Craig.

“And [being in SGA] is helping me out at the same time; it is showing me what responsibilities I can have to help our students even more.”

WINDSOR – Even as North Carolina recovers from the full-on onslaught of Hurricane Florence as well as the remnants of... read more