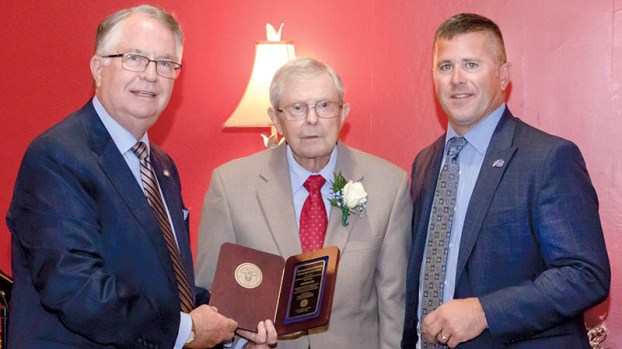 During Homecoming weekend, Chowan University recognized Brinson Paul (center), a member of the Class of 1952, with the 2018 Community Service Award. He was honored among family and friends at a dinner hosted by Chancellor M. Christopher White (left) and President Kirk E. Peterson (right).

MURFREESBORO – During Homecoming weekend, Chowan University recognized Brinson Paul with the 2018 Community Service Award for his tireless efforts on behalf of the Jefcoat Museum, the Murfreesboro community, and Chowan University.

Paul, accompanied by family and friends, was honored along with fellow alumni Richard Thomas Vann Jr. ’68, Dwight A. Downie ’84, and Debra Maingi ’12 at the Homecoming dinner on Saturday, Oct. 13. He received his award from President Kirk E. Peterson and Chancellor M. Christopher White, and then gave an acceptance speech.

Paul, a 1952 graduate of then Chowan Junior College, played varsity baseball and basketball, managed the bookstore and soda shop, and was editor of the yearbook. He also worked at the local Western Auto Store and the Murfreesboro newspaper to help pay for his education.

Following graduation, he began his career in Norfolk, VA, with the Virginian Railroad and worked there until entering the Army in December 1952, where he served as Discharge and Reenlistment Sergeant for the Headquarters Commandant Regiment.

Upon separation from the Army in 1954, he began his 37-year career with the Insurance Division of General Motors in Raleigh. He held various positions in eight cities throughout America. He retired in 1992 as Director of Field Operations for the United States while assigned to the General Motors home office in Detroit, Michigan. Upon retirement, he and his wife Lorene moved to Murfreesboro. Even before all the boxes were unpacked, Bob Hill enlisted Paul to help him with the “Community Service Program” and the Murfreesboro Historical Association.

When the potential opportunity to acquire the “Jefcoat Collection” became known, Paul agreed to spearhead this project – which became a nearly full-time job for over 14 years. He worked to raise the money to purchase the Murfreesboro High School property, renovate the buildings to museum standards, bring the collection from Raleigh, and establish the collection as a museum. With a cadre of over 100 volunteers, Paul brought life to what is now the largest museum collection on display in North Carolina.

The Jefcoat Museum has brought thousands of visitors to Murfreesboro, including people from each inhabited continent on the globe.

In retirement, Paul has served Chowan as a member of both the Board of Trustees and the Board of Visitors on which he currently serves. He is active in promoting sports and enrollment at Chowan.

Paul is an energetic member of the Murfreesboro Baptist Church. He has served on several committees and has been a Deacon and Sunday School Teacher. He spearheaded the formation of an outreach garden for community members who needed help to secure food. The group used their background in gardening and farming to teach the needy how to grow their own food. Paul enjoys giving food from his own annual gardens to family and friends.

WINTON – Although Hurricane Florence chose to unleash her fury in the southeastern part of North Carolina last month, the... read more