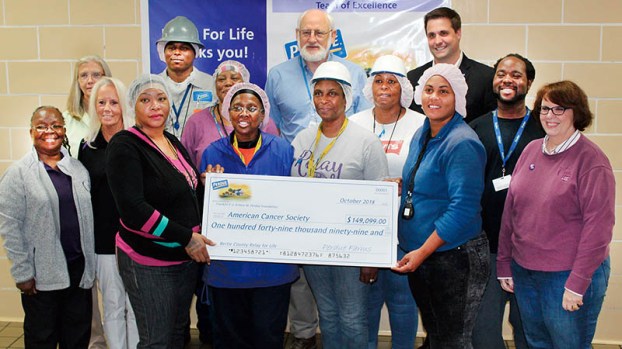 Members of Bertie County Relay for Life, the regional American Cancer Society, and Perdue management join with associates in presenting the ACS a check for nearly $150,000, raised by Perdue’s RFL team in 2018. | Staff Photos by Gene Motley

Just as Bertie County Relay for Life is the top per capita American Cancer Society fundraising event in the nation for its population size – oftentimes outdistancing other communities in the Southeast regardless of population size – then it’s most popular partner in raising those funds to fight that dreaded disease is Perdue Farms of Lewiston-Woodville.

That partnership was celebrated at the Lewiston-Woodville processing plant on Wednesday when Perdue Farms associates presented the American Cancer Society (ACS) with a check for nearly $150,000 raised from their 2018 Bertie County Perdue Farms Relay for Life team.

“For 15 years we’ve held this distinction because of what you’ve been able to do,” said Bertie Relay Funds Chairman Bobbie Parker. 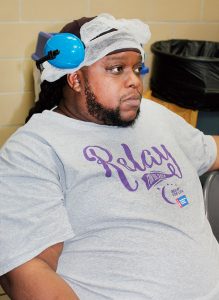 A Perdue associate prominently displays his Relay for Life T-shirt. Since 2001, the Lewiston-Woodville company’s team has raised more than $1.3 million in contributions through Relay for Life.

Parker was joined by Perdue officials and associates, members of the Bertie Relay for Life team, and ACS Regional Director for Central and Eastern North Carolina Dan Thorpe in recognizing the Bertie County business for being its chief fund-raiser over the past 20 years.

“This is really remarkable for a community this size,” Thorpe acknowledged. “Just the fact that they’ve maintained this as our signature fund-raising event by helping us reach more survivors and getting the word out about the services we provide is so significant.”

“Associates here in Lewiston have a long history of generosity and support for the Bertie County Relay for Life,” said Jeff Stalls, Operations Director for Perdue Farms in Lewiston. “About 50 percent of our employees contribute on a weekly basis. Their compassion and giving spirit in support of the American Cancer Society mission never ceases to amaze me. They truly reflect our company’s commitment to make our communities a better place to live.”

The commitment to fighting cancer doesn’t stop in North Carolina. In fact, Perdue Farms’ associates across the company’s footprint are leading the fight against cancer as a member of the American Cancer Society Partners Against Cancer program.

The Partners Against Cancer program provides companies and organizations from all industries with the opportunity to support ACS’s efforts to celebrate cancer survivors and raise awareness and funds through its signature fundraising events. These events include Relay for Life, Making Strides Against Breast Cancer, galas, and golf tournaments.

“Partners Against Cancer like Perdue Farms are making a huge impact on the work of the American Cancer Society,” Thorpe added. “The Lewiston plant in particular has had a long relationship with ACS and made a substantial impact through their support.

Perdue Farms has been supporting the Bertie County event since 1995 with a walk-a-thon held at the outdoor track located at the Lewiston facility. And since 2001, associates in Lewiston have raised more than $1.3 million; or roughly one-third of the entire Relay for Life money generated in Bertie County.

The presentation was particularly relevant at this time because October is Breast Cancer Awareness Month.

“Perdue is working with (the ACS) in helping make cancer less stressful, less lonely, and less scary,” said Parker. “And everywhere cancer rears its ugly head, you’ve helped us to blot its effects.”

Nothing struck home more poignantly than the testimony of actual Perdue associates who attended the recognition ceremony – many of whom have been helped by the ACS.

One such is Perdue associate Marshall Chambers, herself a cancer survivor. Following her diagnosis she was facing several challenges in her life, but the generosity of the ACS was a huge aid in her transition back to better health.

“With the (procedures: chemotherapy & radiation) I was undergoing every day, it was tough on my body going back and forth from Greenville to Ahoskie,” Chambers related. “But they had Hope House there to help me as my lifeline when I couldn’t really make it, and they had me hooked up.”

The greatest gift Chambers said she wanted to give back was an expression of genuine and sincere gratitude.

“To all of you out here who went through what I went through, I know that you’ve struggled and you’ve been through a lot and you’re probably still affected to this day,” she surmised. “And I just want to say thank you (to ACS) for what you’ve done because it means so much.”

“Because of what you do in 2018, and because of what’s on that check, that may be something that funds a (research) breakthrough that may just save someone’s life,” said Thorpe. “If you get a chance, get out (to Relay) there next spring, and when you see the survivors, think of those lives you’ve changed.”

“When (Perdue) came on board and we started the payroll deduction it made a tremendous difference in our monetary collections,” said Bertie Relay Events Coordinator Joanne Jordan. “But more so, to hear the stories when they’re talking about Perdue and ACS, that means everything to touch those lives and to see those survivors. Relay for Life, American Cancer Society – it’s all about our survivors and bringing people onboard who will help with that.”

Parker reminded the associates of the ACS ‘Heroes of Research Award’, given with a $165,000 donation that goes toward, and challenged Perdue to help secure one.

“I want to hear that Bertie County has a ‘Heroes of Research Award’ winner – and I want it to be Perdue Farms,” she noted. “So let’s get going.”

“Our mission is to be an excellent community partner,” he stated. “And you’re being one right now.”

JACKSON – A brief public hearing was held here Monday during the Northampton County Board of Commissioners regular meeting. The... read more