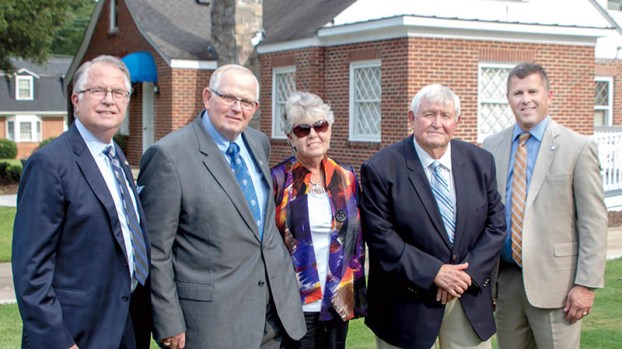 Chair of the Board of Trustees W. Frank Rose Jr., President Kirk E. Peterson, and Chancellor M. Christopher White welcomed the Vaughan and Felton families, the Board of Trustees, faculty, staff, and friends to the dedication of both facilities. Following a brief program, attendees were invited to tour both the Vaughan Chancellor’s Cottage and the Felton University House.

Dr. White stated, “For 170 years prominent members of this area have prayed for guidance and stepped up with action – often in the face of great obstacles. These actions have propelled this institution into greatness.”

Generous supporters like Vaughan and Felton are the backbone of Chowan’s continued success. As a private university, Chowan has relied upon the generosity of those who believe in the viability of the institution since 1848.

President Kirk E. Peterson said, “I am privileged, once again, to be a part of this growing university that is fully embraced by its community members. These two buildings, at the forefront of our campus, now bear the names of two generous trustees who have supported Chowan in many ways over the years. It is an honor to work with such upstanding individuals. The generosity of Jesse and Ray not only enhances the campus aesthetics; it also strengthens our community.”

As Dr. White introduced Vaughan and Felton, he noted many similarities between the two. Both are successful local businessmen who built their businesses from nothing. Both are dedicated Christians who value family. They are so-called self-made men with business practices defined by virtue, honesty, hard work, and fairness. Although, Felton humbly added that he owed all of his success to God. Vaughan and Felton are generous with their resources, sharing their own blessings with the community they love and cherish.

The Jesse E. Vaughan Chancellor’s Cottage was made possible by Jesse Edward “Tink” Vaughan, longtime supporter and Trustee of Chowan University. Vaughan is a resident of Murfreesboro and a retired farmer. He has established both athletic and Christian Service Association scholarships and recently gifted the Vaughan Fountain. Vaughan is known in the community not only for his service to Chowan but also his work with the Jefcoat Museum.

The Felton University House was named in honor of Ray and Judy Felton of Eure. Ray Felton, also a Trustee, is heavily involved at Chowan. He owns and operates Metal Tech in Murfreesboro. Ray and Judy are past recipients of the Chowan University Community Service Award and the North Carolina Baptist Heritage Award.

The Feltons are major supporters of the annual Hertford-Gates Relay for Life and Ray has served as a NC ambassador for the American Cancer Society. He is also the chairman of the Gates County Board of Eduction.

The Office of the Chancellor, along with University Relations, is located in the Felton University House.

Rose remarked, “As a member of the Board of Trustees for many years, I am especially appreciative when board members step up and make significant contributions to the University.”

He continued, “Thanks to both of you for placing your resources where your heart is. Chowan University is on the way to greatness, and you are leading the way. These properties are tangible examples of Chowan’s growth in the past few years.”

Vice President for Development John M. Tayloe added, “Both families have revolutionized how we conduct business and have given us beautiful areas to welcome the public.”

For years to come, these facilities will welcome special guests to Chowan, host meetings and dinners, and provide office space.

“On behalf of Chowan University, I extend my gratitude to Jesse and Ray. The Jesse E. Vaughan Chancellor’s Cottage and the Felton University House will be forever appreciated and cherished,” said President Peterson.

Chowan University gears up for 170th anniversary and Homecoming Week

By Amanda Bradshaw Sharpe University Relations MURFREESBORO – Chowan University is gearing up for Homecoming 2018 with a weeklong celebration... read more