Hertford County let their fans know the Bears still have plenty of bite as they bared their claws and fangs and just about everything else predatory they could find for Saturday night’s Homecoming contest. It turned out to be a 52-6 rout of First Flight High School.

The game was delayed a day after First Flight cancelled after-school activities Friday night due to the remnants of Hurricane Michael passing through Dare County.

It was an even duel through the first quarter as neither team could mount a successful drive.

On the Bears’ last possession of the first quarter leading into the second, the home team finally got something cooking. Starting on the Nighthawks 45 yard line after a short punt, Hertford County drove downfield in eight plays and capped it with a Qyshaun Chism three yard plunge over the end line for the game’s first score, 6-0, at the 11:03 mark. 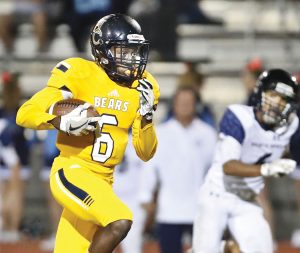 Anron Bond scores on a 60 yard pass play as Hertford County racked up 359 yards of offense against First Flight Saturday night. The Bears’ Homecoming festivities were delayed by a day, but they still celebrated with a 52-6 win over the Nighthawks. | William Anthony Photography

The Bear defense then stepped up and intercepted First Flight quarterback McCoy Davenport as Michale Cooper stepped in front of a pass on the ‘Hawks 45. Eight plays later it was quarterback Tye Saxby sneaking over from the one-yard line to make it 12-0, Bears with 7:31 left in the second quarter.

Fortune smiled on the Bear defense on the next First Flight possession as Hertford County’s Cashawyne Mizzelle recovered a fumble on his team’s own 41-yard line to thwart a Nighthawks drive. Two plays later Saxby connected with Anron Bond from 60 yards out for the Bears’ third score and it was 18-0. The three touchdown bulge held for Hertford County through halftime.

The Nighthawks received the second-half kickoff, but were stopped and forced to punt. The ball was snapped over the First Flight punters head and Hertford County recovered the ball on the Nighthawks’ three-yard line. It only took one play for Chism to run it in from the 3-yard line and it was 24-0 with just under a minute gone in the third quarter.

Another bad snap on a First Flight punt attempt resulted in the Bears recovering it on the ‘Hawks’ 10-yard line. Again, it only took one play to get six points as Amajhea Smallwood had a 10-yard run to the end zone that made it 32-0, and the Bears were starting to pour it on.

First Flight scored their only touchdown of the game with 4:46 left, but still trailed 32-6 as their extra-point kick missed.

The Bears scored two more touchdowns in the quarter and headed to the fourth ahead by 40, as the scoreboard read 46-6, Hertford County. Smallwood had a 29-yard touchdown run and Erion Holley had a 25-yard scamper to account for the two Bears’ scores.

After Hertford County scored in the fourth quarter – Anron Bond with a two-yard run – to make it 52-6, the game clock ran the rest of the game.

Smallwood was the leading rusher, grinding out 82 yards of turf for the Bears. Saxby was 6-for-9 for 159 yards and one touchdown. He also scored another six points rushing.

Hertford County rises to 1-1 in the Northeastern Coastal Conference and 2-4 overall. They travel to Barco on Friday night where they will face Currituck County. First Flight (3-4, 0-2, NCC) returns home after two weeks on the road to host Pasquotank, who had the week off from a date with Bertie due to the weather.