WINTON – The identity of the person alleged to have robbed a Millennium convenience store on Monday morning and injured the owner has been identified.

Hertford County Sheriff Dexter Hayes said warrants have been drawn for the arrest of 45-year-old Moses King Dedmon. The accused, whose has an residential address in Richmond, VA, is now believed to be in that area, according to Hayes.

According to the warrant, Dedmon is wanted for common law robbery and assault inflicting serious injury. 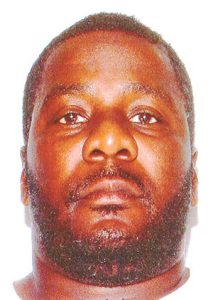 Millennium, a black male wearing a white t-shirt and black pants entered the business, located at 339 Millennium Road, shortly before 10:40 a.m. on Monday.

“The owner of the Southern Mart, Mr. Paresh D. Juikar, was working and behind the checkout counter when the man seen in the video, now known to be Mr. Dedmon, approached the counter and asked to purchase a cigar,” Hayes said. “Upon Mr. Juikar receiving the money for that purchase and was placing it in the cash register, Mr. Dedmon punched Mr. Juikar in the face. At that point, Mr. Dedmon reached inside the register and removed an undetermined amount of cash before fleeing the premises.”

Hayes said Juikar suffered injuries to his face as well as a contusion to the back of his head after falling from the blow. Those injuries required medical attention, the Sheriff said.

“Upon the arrival of my officers and after checking on the condition of Mr. Juikar, they canvassed the immediate neighborhood in search of the suspect as well as to seeing if anyone nearby had witnessed anything,” Hayes said. “We also brought in one of our K-9’s who was able to track a scent from the store back towards Aulander before losing the scent.”

Hayes encouraged those with information on Dedmon’s whereabouts to contact the Hertford County Sheriff’s Office at 252-358-7800.

WINTON – The Hertford County Board of Commissioners have adopted a Capital Project Ordinance as plans to build a new... read more