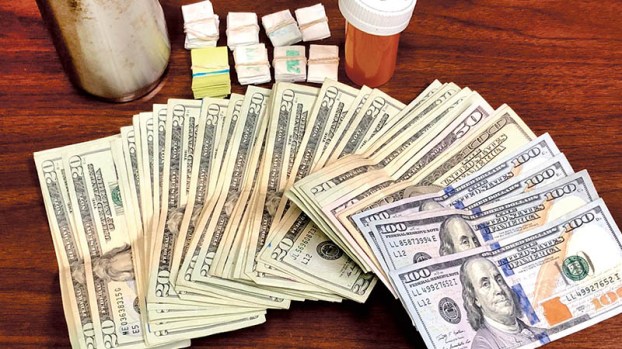 WOODLAND – A Northampton County man with an extensive criminal history along with his Hertford County girlfriend were both arrested near here last week on drug charges.

On Oct. 4, agents with the Down East Drug Task Force were joined by members of the Jackson Police, Roanoke Rapids Police, and State Bureau of Investigation to execute a search warrant at a residence on Springfield Lane located in Creekside Mobile Home Park. That residential area is off NC 35 near the intersection of Ashley’s Grove Road.

According to Task Force Agent Mike Sledge, the search of the residence revealed approximately 77 bindles of heroin and a large amount of cash.

Sledge charged 39-year-old Rodney Tierre Vaughan Jr. (aka “Third”) of Woodland with three felonies – possession of heroin, possession with intent to sell and deliver heroin, and maintain a dwelling/vehicle/place to keep a controlled substance.

Vaughan was booked into the Northampton County Detention Center in Jackson under a $20,000 secured bond.

Also arrested was Vaughan’s girlfriend, 20-year-old Shannon Brooke Brady of Ahoskie. She was charged with felony possession of heroin after Task Force agents seized a quantity of the illegal drug in her purse.

Vaughan and Brady are scheduled to appear today (Thursday) in Northampton County Criminal District Court to answer the charges.

Sledge said the search warrant was issued due to complaints from the community regarding the residence. He also said that Vaughan has “an extensive criminal record.”

According to the North Carolina Department of Public Safety’s website, Vaughan has served time in prison for a previous drug arrest – an eight-month term for a possession charge with intent to sale conviction in Bertie County in 1994.

He also served three months behind bars for a 1998 conviction of possession of a firearm by a felon.

Additionally, Vaughan was in prison for 15 months following his conviction in Bertie County in 2001 for attempted assault with a deadly weapon with intent to kill.

“My officers and the Down East Drug Task Force agents will not tolerate those who choose to pollute our community with poisonous drugs.” Smith said.