The threat of Hurricane Michael has forced several schools to re-schedule their Friday night high school football games. Last night (Wed.) it was Gates County at Perquimans and tonight (Thu.) it is Northeast-Hobgood Academy at Pungo. Friday it will be Lawrence Academy at Halifax Academy, Northampton at NW Halifax, and First Flight at Hertford Co. Any of those three could also be moved to Saturday night, if necessary.

As of today (10/11), there is one postponement: the Bertie-Pasquotank game has been moved to Nov. 9 in Elizabeth City. Head coach and athletic director Grantley Mizelle also says the Sept. 14 home game with Washington in Windsor will not be made up due to conference scheduling.

“First Flight is a well-coached team,” continued Saxby. “They won’t beat themselves. It’s also our Homecoming game and a big conference game as no one wants to start 0-2 in the league.”

“We need to have good practices this week,” he concluded. “We also have to do the things we do very well.”

“It was a good win in our conference opener,” said Red Barons coach Matt Biggy. “Both our offense and defense played well last week, and we are getting guys healthy.” 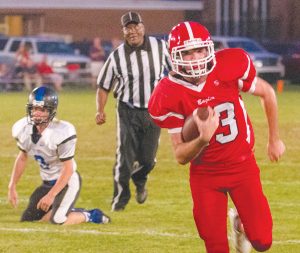 Northeast-Hobgood’s J.T. Simmons (#13, w/ball) continues to run roughshod over defenses for the Eagles. This weekend, Simmons and company will be trying to outrun the coming storm as weather once again impacts area high school games. | Photo by Angie Todd

With a win the Red Barons will begin conference play at 2-0.

“We ran the ball well, made adjustments, and went on to the big win,” said Jags coach George Privott.

“Northwest Halifax has a good coach,” said Privott. “They run the spread offense and also run a lot of option plays.”

“We have to protect the ball on offense and have the defense make plays,” the coach closed.

With a win, Northampton will be 4-0 to start conference play for the second year in a row.

Last Friday night Northeast-Hobgood’s combo team continued their march to a second consecutive state championship game with their fifth straight 50-plus point game in Colonial Carolinas 8-Man football action, 54-40 over Bethel Christian for Homecoming at Lasker (they will have another Homecoming in Hobgood in another two weeks).

Running back J.T. Simmons continues to be a big part of the Eagles’ offense with 394 yards gained on the ground and seven touchdowns.

While Pungo looks to rise to .500 in conference play, the Eagles are trying to fly to 6-0.

The maturation process at Lawrence Academy continues. The young Warriors fell to Pungo in their home finale 62-18.

“I think we’re getting better as a team,” said LAW coach Lee Hoffman, “it’s just not showing up in victories just yet. We’re going to Halifax where it’s going to be their Senior Night. That presents a huge challenge.”

This Friday night in Roanoke Rapids it will be Lawrence (0-5, 0-3, CCC), still seeking that elusive first victory, against undefeated Halifax Academy (5-0, 2-0, NCC)

“We’ve spent this week talking about getting better every play and execution on offense and defense,” Hoffman concluded. “We have to cut down mistakes on both sides of the football to be more successful.”

AHOSKIE – Northeastern quarterback Aaron Harris just missed the hat trick. By the end of the night, they were tipping... read more