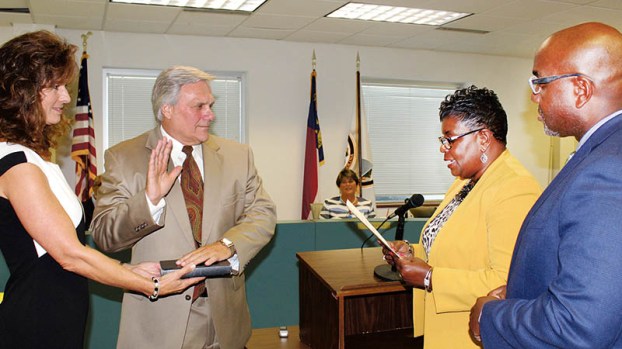 Trent, the newest member of the RCCC Board was appointed by Governor Roy Cooper, succeeding Julie Terry whose term expired this year.

With his wife, Beverly, holding the family Bible, Bertie County Clerk of Superior Court Vasti James administered the oath, which was also witnessed by RCCC President, Dr. Stanley Elliott.  Afterward, Trent pledged to work for the betterment of the school.

“I hope I can assist with new programs, and assist the President in moving us forward so we can take pride in the outstanding things these students can accomplish,” Trent said.

Elliott spoke earlier, acknowledging the Oct. 1 date as his one-year anniversary on the job.

“I joked earlier that it feels sometime like dog years,” quipped Elliott. “But I also said it’s the toughest job you’ll ever love.”

Elliott went on to praise all four counties from which RCCC draws its enrollment.

“One thing I really enjoy is being a great community partner with Bertie, Hertford, and Northampton counties.” Elliott noted.

Elliott’s remarks came after Rhonda Hendricks, Career Readiness Coordinator for Adult Corrections with the NC Department of Public Safety, spoke to the group about the ongoing success of the Public Safety Cadet Program offered by Bertie County Schools at Bertie High School.

“We have supported the Cadet program both in deed and in service,” Elliott said. “The program has produced some great students and we have been meeting the last couple of weeks with Martin Community College so that we can move forward as one.”

Elliott said there’s no competition for enrollment since RCCC and MCC both have a qualitative amount of Bertie County students.

“It’s not about FTE (full-time enrollment) or the money we get,” he explained. “It’s about supporting the students of Bertie County. One of the things I believe in is forging forward and putting those things in the past behind us.”

Elliott said the Cadet program is doing so well at Bertie that Hertford County Public Schools will be launching a similar program next year.

Other new programs Elliott touted included RCCC’s return to offering the Class-A CDL (Commercial Driver’s License) Truck Driving Instruction program, which was first offered at the college back in 2007.

“We brought it back because there is a shortage of truck drivers,” he said.

Also included will be expanded WIOA (Workforce Innovation and Opportunity Act), a federally funded program that provides core, intensive, and training services through the college’s NC Works Career Center. Elliott says this will help pay for tuition for students who are challenged for resources, and it will offer a mix of employment, training, and job placement services.

“We also brought back Highway Maintenance and Construction, because the median age of folks doing that job is (late 50’s)”, he acknowledged. “So those people are retiring.”

Elliott says he has been able to secure a grant for OSHA training and other certifications.

“And these are totally free programs for residents of the area,” he stated.

Elliott ended his remarks by thanking the commissioners for their appropriation to RCCC over the past two years.