By the end of the night, they were tipping their hats to him.

One more TD either way and it would have been a ‘triple’ in scoring, which would’ve been good for the hat trick.

How powerful was the Eagle attack.  Highly touted running back Trayveon Freshwater didn’t even play.

Northeastern wasted little time getting on the scoreboard, scoring on their first two possessions for a 12-0 lead as the extra point kick was no-good both times.

On the next kickoff, the Bears’ Qyshaun Chism took the ensuing kickoff 70 yards past the Eagles coverage to get Hertford County on the board and it was 12-6 with 4:35 left in the first quarter. 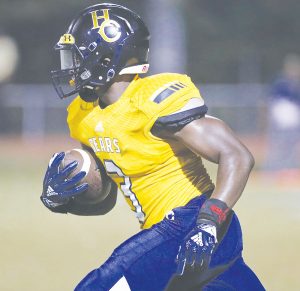 Hertford County’s Qyshaun Chism streaks for the end zone on a 70 yard kickoff return for a touchdown in Friday night’s game against Northeastern. Chism’s run was one of few Bears highlights as the powerful Eagles scored a 53-13 win. | William Anthony Photography

Suddenly, within six of the second-ranked team in the state, Bears fans had hope of an upset.

But that return would be the only mistake Northeastern coach Antonio Moore’s squad would make as Hertford County didn’t score again until the last play of the game.

In the meantime, the Eagles would tack on three more touchdowns in the second quarter, all three on the ground.  Harris scored one and one each by two more Northeastern rushers – neither named Freshwater.

The Eagle onslaught continued as Northeastern scored another pair of TD’s in the third quarter – another one for Harris, this time through the air – and it was 46-6 after three quarters of football.

Northeastern scored its final touchdown early in the fourth quarter making it 53-6, creating a running clock with eleven minutes remaining in the game.

On the Bears’ final drive, Hertford County engineered its final touchdown of the game: a 55-yard drive in seven plays culminating with Tye Saxby’s 13-yard scoring strike to Anron Bond just before the horn sounded, as Chism kicked the extra-point.

Northeastern racked up 393 total yards to 167 for the home team Bears.

Hertford County’s leading rusher was Amajhea Smallwood with 61 yards on eight carries. Saxby had 97 yards passing on 6-for-12 attempts.

The Eagles – still second in the MaxPreps 2A poll – rise to 6-0 and 1-0 in the Northeastern Coastal Conference.

The Bears fall to 1-4 and 0-1 in the league. They will celebrate Homecoming this Friday night when they welcome First Flight to the Bear’s Den.