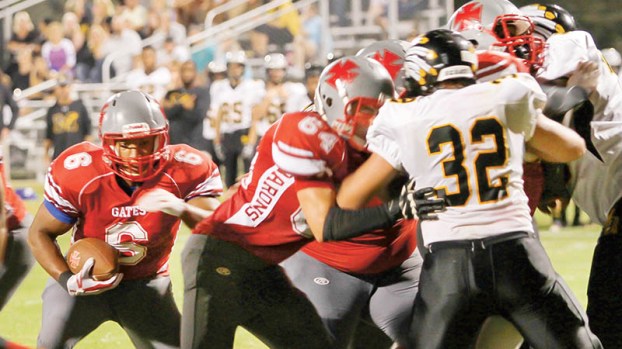 Gates County’s Greg Crandol (#6) cuts behind a block from teammate Trey Bowen (#64) during Friday’s Albemarle Conference opener. Crandol rushed for a game-high 91 yards and scored a pair of touchdowns to help lead the Red Barons to a 41-14 victory. | Photo by Charles Revelle

GATESVILLE – After their first two offensive possessions produced only 21 yards here Friday night, it appeared that Gates County was still reeling from the aftereffects of their first loss of the season – a heartbreaking two-point (22-20) setback at Bertie on Sept. 26.

However, when that offensive slump finally ended, the points piled up in grand fashion

Quarterback Jawan Riddick continued his banner season, throwing for 145 yards and three touchdowns while rushing for another score, as the Red Barons rallied from an early 7-0 deficit to defeat visiting Manteo, 41-14, before an appreciative homecoming night crowd.

The game was the Albemarle Conference opener for both teams.

Trailing by seven after Manteo scored on its second possession of the game thanks to a “pitch-and-catch” on a quick slant that resulted in a 65-yard pass play from Bryson Sawyer to Claveon Rice, Gates County finally found some rhythm on offense.

On the game’s ensuing possession, the Red Barons used a key 43-yard scamper by Riddick on a third down play to reach Manteo’s 12 yardline. Three plays later, Greg Crandol crashed into the endzone from one yard out. Coupled with a successful PAT from Caleb Brickhouse, the contest was tied at 7-7 at the 2:01 mark of the first quarter.

It appeared that GCHS would add to that lead when Manteo’s next possession ended in disaster where a bobbled punt led to a nine-yard tackle for loss by linebacker Da’Quan Drake and the Red Barons took over at the Redskins 26 yardline. But Gates failed to move the sticks from that point, leading to Brickhouse attempting a 42-yard field goal that fell just short.

After Manteo went three-and-out on their next series, Jordan Robinson put the Red Barons in great field position by returning the punt 17 yards to the Redskins 33 yardline. Crandol took over from there, gaining five yards on first down and then taking a second-down hand-off, using a stutter-step to junk a defender at the 19 en route to a 28-yard TD run. Brickhouse tacked on the PAT for a 14-7 lead with 7:55 left before halftime.

Gates County’s defense then turned in two key plays to preserve that lead. The first derailed a 10-play, 66-yard Manteo drive thanks to Adonis White’s leaping interception at the one yardline. The other came late in the second quarter with Manteo threatening from the GCHS 21 yardline. There, Drake pounced on a Redskins fumble.

Four plays later, with the first half clock nearly expired, the Red Barons offensive line gave Riddick ample time to survey his options before connecting with Ron Olsen on a 58-yard touchdown pass with four seconds left until intermission. The PAT kick sailed left, but the ‘Barons had a 20-7 halftime lead.

From there, GCHS put the game on ice by scoring on three straight possessions in the second half to build a commanding 41-7 lead.

Highlighted by the ground attack of Riddick and Crandol, the Red Barons ran 10 times on their opening drive of the third quarter to reach Manteo’s 10 yardline. From there, Riddick threw a scoring pass to Ty’rell Holley and coupled with a PAT from Brickhouse, Gates extended its lead to 27-7 at the 3:36 mark of the period.

On their next series, GCHS started at Manteo’s 48 yardline after a short punt and used a 35-yard pass from Riddick to Robinson to set-up a 9-yard scoring connection between Riddick and Olsen. Brickhouse booted the PAT for a comfortable 34-7 lead early in the fourth quarter.

The Red Barons closed out the lopsided win with an 11-play, 55-yard scoring drive that ate-up over five minutes off the clock. That drive ended with Riddick calling his own number and darting 10 yards to paydirt. Back-up kicker Cody Higginbotham nailed the PAT for a 41-7 advantage with exactly four minutes left in the game.

Playing against the GCHS reserve defenders, Manteo tallied the game’s final touchdown on a five-yard pass from Sawyer to Darren Saunders.

Defensively, the Red Barons were led by Drake with eight tackles followed by four stops each by Dustin McConnell, Tahjik Pope and Kalab Logan.