GATESVILLE – The criminal case against a former Gates County Sheriff’s Deputy arrested in December of last year on a number of charges is scheduled for Superior Court here next week.

The docket for the Oct. 8 session of Superior Court in Gates County lists Brandon Scott Hawks among the defendants whose cases are scheduled to be heard by the Honorable Judge Jerry R. Tillett.

In December, the SBI arrested Hawks, who at the time was a Sergeant with the Gates County Sheriff’s Office. Hawks was charged two counts of embezzlement of property by public officer and one count of larceny of a firearm.

According to the SBI, Hawks, who was fired the day after his arrest, allegedly did “embezzle and corruptly use and misapply two grams of an off-white powder substance, property belonging to the State of North Carolina as evidence for criminal prosecution, and being held in trust by the Gates County Sheriff’s Office for such use.” It was also alleged he did the same on the same day (July 8, 2016), but this time the amount was one gram. 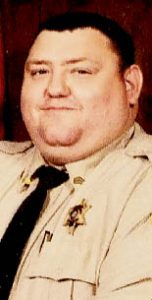 In his original arrest report from December, it was alleged that Hawks also stole a Glock 26 handgun that belonged to the state. It is further alleged that Hawks unlawfully seized that handgun during a traffic stop on July 23, 2017 and never submitted it as evidence to the Gates County Sheriff’s Office.

In January, at the same time the indictments were handed down against now former Gates County Sheriff Randy Hathaway and three of his other deputies, there were several new charges lodged against Hawks. They are as follows:

Five counts of embezzlement of property by public officer. The indictments indicate that Hawks did “unlawfully, willfully and feloniously did embezzle and corruptly use and misapply” $1,300 in U.S. currency on July 8, 2016; $1,800 in U.S. currency on March 27, 2017; an Apple iPhone on July 8, 2016; crack cocaine seized by another deputy on June 10, 2017; and four, off-white rocks of suspected crack cocaine between February 2016 and December 2017. In each of those indictments it was noted that the embezzled items were property belonging to the State of North Carolina as evidence for criminal prosecution, and being held in trust by the Gates County Sheriff’s Office for such use.

Hawks was also indicted for felony obstruction of justice, which allegedly took place between Oct. 1-31, 2017. In that case, it’s alleged he “unlawfully, willfully and feloniously did obstruct justice by telling an individual [name omitted] to lie to investigators if they interviewed [the individual] regarding the defendant [Hawks]. This offense was done with deceit and intent to defraud.”

Hawks had been employed as a Gates County Sheriff’s Deputy since 2009. He had previously worked with the county as a Deputy from 2006 to 2008 before being rehired in 2009.

His father, Scott Hawks, was also arrested in January of this year on two counts of possession of a stolen firearm. The case against Scott Hawks is also on the Gates County Superior Court docket next week.