Northeastern (ranked 2nd in the state among 2A teams in the MaxPreps poll) pays a visit to Hertford County and First Flight visits Bertie at Roy Bond Jr. Stadium in Windsor as all four open 2A Northeastern Coastal Conference play.

Gates County will be hosting Manteo in the 1A Albemarle Conference opener for the Red Barons and Redskins; while in the 1A Tar-Roanoke Conference, it will be Northampton County at Southeast Halifax in what’s already the third game in league play for those two.

Hertford County postponed their game at Jacksonville from last Friday night as Onslow County continues to recover from the aftermath of Hurricane Florence. In fact, the Bears only played one game in the month of September, a 45-0 shutout win two weeks ago against North Pitt.

Friday night’s game features Northeastern (5-0) at Hertford County (1-3) in the conference opener for both teams. 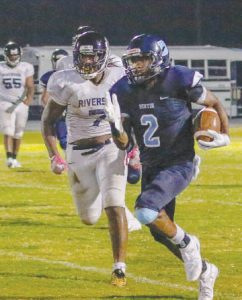 Bertie High’s Chris Cooper (#2) scampers for a long gain in a previous game. Cooper’s 832 yards leads the Northeastern Coastal Conference in rushing as the Falcons prepare for their league opener Friday on Homecoming Night against First Flight. | photomedoc.com / Steven Ferguson

“Northeastern is very athletic,” added Saxby. “They have a strong running game, a good quarterback, and a good running back. They are also undefeated and very good.”

Last Thursday, in the make-up of a game postponed from August 31, Bertie beat Gates County late by a 22-20 score.

“It was a tough game,” insisted Falcons head coach Grantley Mizelle. “We had a good first half and the defense played well.”

This week, on Homecoming Night in Windsor, it will be First Flight (3-2) against Bertie (3-2) in the league opener for both squads.

“First Flight is fundamentally sound. They run the Wing-T offense and they have a very good coach (Jim Price),” said Mizelle.

“We must tackle on defense and execute on offense,” closed the coach. “We also have to do a good job of taking care of the ball.”

Last Thursday night Gates County failed at a two-point conversion that would have tied the game late in the fourth quarter and saw their unbeaten streak end as they fell to Bertie.

“We fell behind in the first half,” said Red Barons head coach Matt Biggy. “Then we fumbled the two-point conversion that could have tied and maybe later made a difference in the game.”

This Friday night it will be Manteo (3-3) at Gates County (4-1) to help the ‘Barons “celebrate” Homecoming in their Albemarle Conference opener.

“Manteo has good size. They’re going to run the football and play good defense,” the coach concluded. “We must play four quarters of football, execute on offense and just play our game.”

“We made adjustments at halftime,” said Jaguars head coach George Privott. “We played well and went on to get the win.”

“Southeast Halifax won their conference opener,” Privott added. “They have a new coach and a good quarterback; plus, this is a game between conference unbeatens.”

The Jags will try to go to 3-0 in their conference and maintain the top spot in the Tar-Roanoke.

“We must play well on defense and adjust to the new defense they run,” closed Privott. “Offensively, we must control the clock, control the ball, and have good execution.”

Lawrence Academy played their homecoming game last Friday night as Bethel Christian tried to spoil the festivities by claiming a 44-0 victory over the Warriors in Colonial Conference 8-Man play.

This Friday night it will be first-year program Pungo Christian Academy (2-2) visiting Merry Hill to face Lawrence (0-4). In their first year, the Raiders have already posted a pair of wins.

“This is a rivalry game,” said Warriors head coach Lee Hoffman. “We’re playing Pungo in football for the first time in 25-plus years. We need to come out fired up and ready to play.”

Lawrence will be seeking their first win of the year.

“We need to execute better on offense,” Hoffman concluded. “We need to sustain drives to keep our defense off the field, and defensively we have to stop the option and long passing game.”

Northeast-Hobgood continues rolling along with their season and putting up big wins.  Last Friday, it was another 50-plus point outing as they crushed Community Christian 54-14.

“We came out flat, but we managed to finish strong,” said NEA-Hobgood head coach Brandon Lanier.

This Friday it will be Bethel Christian (2-2) coming to Lasker for the NEA-H (4-0) Homecoming game.

“We played them earlier this season,” Lanier added. “They are a good football team.”

“Tackling is a big key for us on defense,” the coach concluded. “We also must block on offense.”

MERRY HILL – The Bethel Christian football team didn’t let the pomp of the night distract them. Neither in a... read more