MERRY HILL – The Bethel Christian football team didn’t let the pomp of the night distract them.

Neither in a way did Lawrence

The Trojans spoiled Homecoming Night for LAW here with a 44-0 shutout, leaving the Warriors still in search of their first win of the year.

On the first play of the game, running back Cody Dunk took the handoff and went up the middle 50 yards through the Warrior defense for the game’s first score. He also added the two-point conversion with a run for an 8-0 Bethel lead before most of the fans had even made it to their seats. 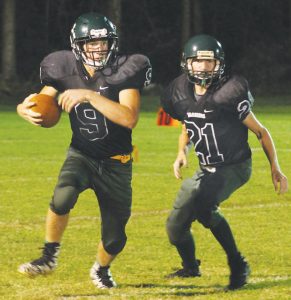 The first Lawrence possession was their best drive of the night. The Warriors drove to the Bethel 18-yard line thanks to runs by Charles Atkins and a pair of Bethel penalties. However, two incompletion shots to the end zone left LAW still trying to score.

Bethel took over on the 18 and on the third play from scrimmage he sprinted 70 yards to the end zone and another conversion made it 16-0, Trojans.

In the second quarter Williams took to the air with a trio of touchdown tosses from the Lawrence 35, then a 22-yard strike, followed by a 49 yard bomb that left Lawrence trailing 36-0 at halftime.

Lawrence’s defense held Bethel off the scoreboard in the third quarter, but the Trojans got one more score as Rodney Warren scampered in from five yards out to make for the final.

Lawrence rushed 25 times for 61 yards and was 0-5 in passing for 61 yards of total offense. A still-young team is growing with each game, especially in ways like effort and attitude and other factors not shown on the scoreboard.

One bright spot for the Warrior faithful was the crowning of the 2018 Homecoming king and queen in Joe ‘Cheese’ White and Chloe Walston picking up the honor.

MURFREESBORO – Despite playing an opponent that hadn’t even been able to get on the field to practice in two... read more