The clerk was shot once in an undisclosed part of the body and the injury is considered life-threatening, Roanoke Rapids Police Chief Chuck Hasty said.

The robbery occurred at New Dixie Mart in the 100 block of Julian R. Allsbrook Highway around 12:45 a.m. The store is traditionally known as Presto.

Hasty said in a statement employees told officers the suspects entered the store armed with handguns and demanded money.

During the robbery, one of the suspects jumped the counter while the other suspect ran to the back and went behind the counter. 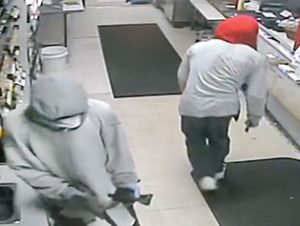 This still image taken from a surveillance camera shows two armed suspects behind the counter on Wednesday morning at the New Dixie Mart in Roanoke Rapids.

The suspects demanded the clerks open the safe at which time the clerks advised they did not have access to the safe.

One of the suspects struck the employee in the head with a handgun. The suspects proceeded to take money and cigarettes.

When the suspects were exiting the store, one returned back to the counter and shot the employee who had initially been struck in the head with the weapon.

The employee was transported by Halifax County EMS to Halifax Regional Medical Center and then transported to a trauma center for treatment of the injuries.

The suspects in the photos taken from the store’s security cameras bear a resemblance to suspects wanted in an armed robbery in Weldon last week.

The Weldon robbery occurred shortly before 8:30 p.m. on Monday, Sept. 17 at a store in the 200 block of East Second Street.

Both suspects had handguns.

He said it is possible they may have left the scene in a vehicle.

In both cases, police say the suspects are considered armed and dangerous and should not be approached. Contact law enforcement to let them know the location.

WINTON – Military personnel, active and retired, can never be fully paid for their willingness to place themselves in harm’s... read more