Gates County and Bertie High Schools with get in their weather-delayed game tonight (Thu.) that was postponed from the end of August due to lightning. And in a related note, with the NC High School Athletic Association adding an extra regular-season playing date (moving the final weekend from Nov. 2 to Nov. 9), several schools will try to reschedule the games lost on Sept. 14.

Meanwhile, this Friday’s games include Bethel Christian at Lawrence, North Edgecombe at Northampton County, Northeast-Hobgood at Community Christian, and Hertford County at Jacksonville.

“Bertie is a very good team,” said Red Barons coach Matt Biggy. “They can run and pass offensively and their defense is very quick to the ball.” 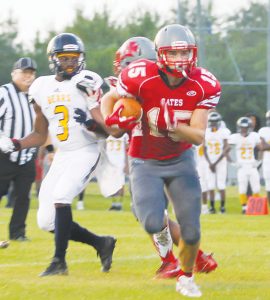 It’s been a short work week for the Red Barons’ leading rusher Ron Olsen (#15) and his Gates County High teammates as they will play their Aug. 31 make-up game tonight (Thu.) in Windsor against Bertie. | Next Level Photos / Charles Revelle

Falcons coach Grantley Mizelle countered, “Gates County has a good running back and quarterback, and they also have a big offensive line.”

“We have to play our assignments defensively, and offensively (we have to) make plays,” concluded Biggy.

“We have to execute in all phases of the game, offensively, defensively, and on special teams,” closed Mizelle.

“I was proud of our effort,” said HCHS head coach Terrance Saxby. “The offense sustained drives and scored points and the defense played great with the shutout.”

This Friday, Hertford County (1-3) is back on the road, this time in Hurricane-soaked Onslow County to face a Jacksonville (3-0) team that hasn’t played in two weeks.

“They have a very athletic quarterback and two good running backs,” added Saxby.

“Defensively, we must play assignment football and continue to play well,” the coach concluded. “Offensively, we need to have good execution.”

“North Edgecombe runs the wishbone offense. They also have a new coach and beat KIPP Pride (44-30) in their conference opener,” Privott added.

Both teams will be trying to remain unbeaten in conference play.

“(To get a win) we need to protect the ball, play well on defense, and execute on offense,” closed Privott.

“Lawrence was a good game for us,” said NEA-Hobgood coach Brandon Lanier. “We ran different sets on offense and had a good night of passing from (quarterback) Ryan Rowe.”

This Friday night it will be Northeast-Hobgood (3-0) on the road in Wilson at Community Christian (1-3).

“Community has a young team and they have a good coach,” Lanier closed. “We need to tackle well on defense and block well on offense.”

Last Friday Lawrence fell to Northeast-Hobgood. The game marked the second week in a row the Warriors had been shutout.

“We didn’t play well on offense; poor execution, and too many missed blocks,” said Warriors’ coach Lee Hoffman. “Defensively, we did a good job against the run but played poorly versus the pass.”

This Friday night Lawrence (0-3) is back in Merry Hill where they will play Bethel Christian (1-2).

“Bethel is fast and mainly a run team,” added Hoffman. “We have to stop the run and keep them from getting to the outside.”

Friday’s game is also Homecoming Night at Lawrence, and a good time for the Warriors to post their first win.

“Offensively, we’ve gone back to basics and we’ll try to improve on our offense being efficient and moving the ball consistently,” the coach concluded.