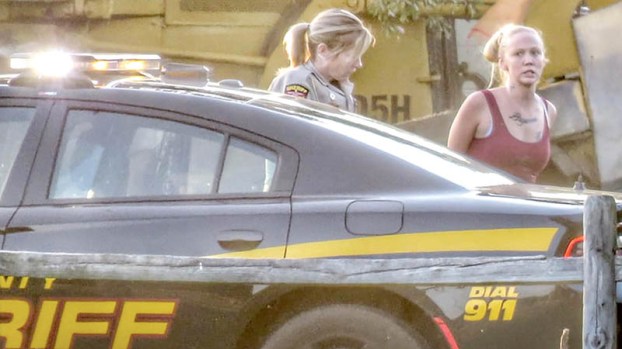 Brittany Vanhorn (right) is shown being led to an awaiting Bertie County Sheriff’s vehicle after being nabbed last week at a residence in the Shiloh community of Camden County. She was wanted in Bertie County on several charges stemming from the Sept. 8 home invasion and robbery of an elderly Windsor man. | Photo by Donna Smith Rose

WINDSOR – Two suspects were taken into custody within days of a home invasion here, and two more were captured late last week in connection to the breaking-and-entering that occurred here on Saturday, Sept. 8.

Bertie County Sheriff John Holley stated that on that date, multiple suspects forcibly entered a home on Tony’s Lane, off Governor’s Road, and held an elderly homeowner at gunpoint while the suspects removed items from the home.

After responses by deputies of the Sheriff’s Office into the incident, an investigation was begun.

A return to the scene and an interview with witnesses provided more information to law enforcement and the investigation widened.

“Thanks to dogged and diligent police work, with all investigators working non-stop to identify the suspects and recover any of the stolen property, they were able to get a handle on this case within 24 hours of the initial report,” Holley said last week.

Vanhorn and J. Rascoe were wanted for armed robbery, kidnapping, burglary, safecracking, larceny of a firearm, possession of a firearm by a felon, and larceny from the person, along with other charges related to the incident.

The pair then reportedly fled Bertie County and were said to be considered armed and extremely dangerous. In addition to no information available as to their whereabouts, their destination or mode of travel was also unknown at the time.

Meanwhile, Cooper was arrested within several days while Smallwood was taken into custody on Tuesday, Sept. 18. Both were held in the Bertie-Martin Regional Jail and charged with the same offenses listed for Vanhorn and Rascoe except for the charge of possession of a firearm by a felon.

On Sept. 20, Holley says Vanhorn and Rascoe were arrested after being located in Camden, NC. The two had spent more than a week eluding arrest by moving from place to place.

“I would like to thank Martin County Sheriff’s Office, Williamston Police Department, Camden County Sheriff’s Office, Elizabeth City Police Department, North Carolina State Bureau of Investigation, the FBI, and Task Force officers with the Bureau of Alcohol, Tobacco, and Firearms for the many hours of surveillance that led to several search warrants and eventually the arrests of these two suspects,” Holley said in a news release on Monday.

Holley went on to add the investigation has revealed several other suspects had allegedly become involved before, during, and after the home invasion. He said facts were still being collected as related to the case and that the investigation is ongoing.

“The Bertie County Sheriff’s Office Investigations Division will continue to review the facts of the case to identify everyone involved,” Holley noted. “There will be more arrests related to this case in the coming days.”

Last year, Vanhorn completed a seven-year prison sentence for a Sept. 1, 2010 crime involving felony trafficking of illegal drugs in Bertie County, according to the NC Division of Public Safety. She was convicted of that crime 13 months later and spent her time in the North Carolina Correctional Institution for Women.

Her arrest record dates back to Jan. 28, 2007 where she received a suspended sentence and was placed on parole for misdemeanor possession of a controlled substance. While on parole for that crime, Vanhorn was arrested on Feb. 12, 2007 for felony possession of illegal drugs. She spent one month and five days behind bars and placed on probation. Both those crimes were also in Bertie County.

WINDSOR – Two suspects have been taken into custody while two others remain at large charged in connection to a... read more