He was born in Ahoskie, NC on January 27, 1950, and was the son of the late Robert Lee and Valeria Brown Chamblee. Also preceding him in death are his grandparents, John and Essie Chamblee, with whom he was very close.

Wayne was a chemist and a chemical engineer and had worked for Union Camp, RJR Nabisco, Merck, Kamyr, and Roche Carolina prior to his retirement. He worked in research and development and held many patents with his colleagues. He also worked in production and excelled at problem solving. 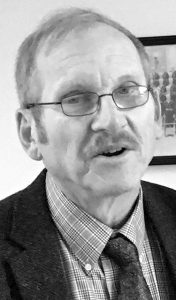 He was active at Bridgewater United Methodist Church in Virginia and Pisgah UMC in Florence, SC and was raised in the Hickory Chapel Free Will Baptist Church.

Wayne loved the outdoors, hiking and biking, canoeing and traveling. He was a private pilot and an amateur radio operator.

A memorial service will be held at Bridgewater United Methodist Church at 2:00 p.m. on Sunday, September 23, 2018 with Rev. Stephen Creech and Rev. Jim Harris officiating. The family will receive friends following the memorial service.

Online condolences may be sent to the family at www.johnsonfs.com.