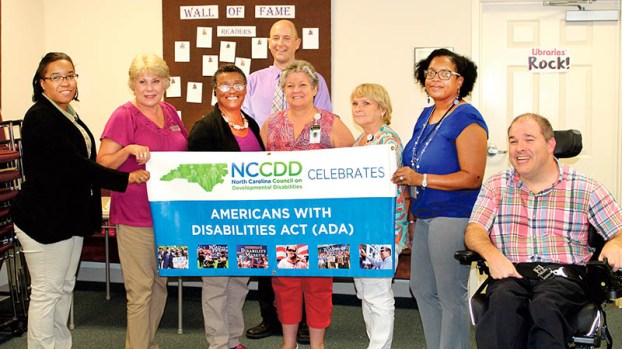 Presenters Philip Woodward (back row) and Jonathan Ellis (seated, front row right) pose for a photo with some attendees at the ADA training seminar held at the Elizabeth S. Parker Memorial Library in Murfreesboro. The informational session focused on service animals as covered by the Americans with Disabilities Act. | Staff photo by Holly Taylor

MURFREESBORO – Many Americans benefit from having service animals thanks to the Americans with Disabilities Act (ADA), but not everyone knows the details of what the animals do or how to interact with them. A seminar held here on Sept 6 aimed to spread more local awareness on the topic.

Jonathan Ellis, a Murfreesboro native and owner of Sutton Advocate Consulting Services, and Philip Woodward from the North Carolina Council on Developmental Disabilities presented the information to a group eager to learn at the Elizabeth S. Parker Memorial Library in Murfreesboro.

The ADA, which was signed by President George Bush on July 26, 1990, provided many people with disabilities the means to live a more typical life without discriminations. The use of service animals is one of the things included in the law, particularly under the ADA’s Title II (Public Services: State and Local Government) and Title III (Public Accommodations and Services Operated by Private Entities) sections.

In an interactive discussion with the seminar participants, Woodward and Ellis went over aspects of service animals such as what they do, what animals qualify, and how to interact with them.

A service animal is trained to perform tasks to benefit someone with a disability, Woodward explained. They’re not to be confused with emotional support animals.

Ellis, who is confined to a wheelchair, explained the service dog he once owned would perform tasks such as opening doors, keeping him from falling off curbs, and picking up items he dropped. His dog was even trained to pass his wallet to the cashier when checking out at a store.

“I got my service animal in 1998 from an organization in Pennsylvania called Canine Partners for Life,” Ellis said.

He explained the organization trained his dog to perform those tasks, and he had to spend a few weeks in what he jokingly called “boot camp” while he got to meet his dog and learn how to care for her.

One person from the audience asked if owners can train a service dog themselves.

Woodward answered yes, explaining the ADA rules were a bit open to interpretation in that area. There’s no specification on who has to train the animal. Ellis added it usually takes up to two years to properly train a service animal and that training the animal to be housebroken and comfortable in a community environment are vital requirements.

A service animal is required to be on a leash or tether unless that interferes with the animal’s ability to perform its duties. Without a leash, the dog must be under voice commands from its handler. Some wheelchair users choose not to put their animal on a leash to prevent harming the animal if the leash gets tangled in their equipment.

One important thing both presenters mentioned was that only two kinds of animals are legally allowed to be service animals. While other animals can serve as emotional support—Woodward had heard of examples such as potbellied pigs, sugar gliders, snakes, and even peacocks—the ADA only allows dogs and miniature horses to provide service for people with disabilities.

“Some people find miniature horses useful because they can live longer than a dog can live. There’s less turnover,” Woodward explained, but noted they were less commonly used.

Woodward told a story about someone who came to his office who used a miniature horse as a service animal. He said other people thought the horse was fascinating and wanted to take pictures of it.

“Never touch a service animal or take a picture with it unless the handler says it’s okay,” he cautioned.

“You have to act as if the animal is nonexistent,” Ellis added. “If you go up to it and it’s in the middle of a task the handler needs, it could injure the handler.”

Some seminar attendees had questions about identifying service animals.

Ellis said most of the time an animal will be wearing an identification vest, but that is not required by law. In North Carolina, only service animals in training must wear identification.

Questioners are not allowed to ask about the person’s specific disability, and they cannot require medical documentation or request the animal demonstrate their tasks.

When one person asked what would happen if someone tried to pass their pet for a service animal, Ellis answered “a service animal has to be specifically trained for a task. Most pets are not.”

Woodward added that, under the law, the person being questioned has to give a legitimate answer to the two questions.

Service animals are allowed to accompany people in all public places where the general public is allowed to go. Woodward illustrated an example being that a service animal would be allowed into a restaurant but not into the restaurant’s kitchen, like any other customer.

Another example would be allowing service animals in a hospital waiting room but not a hospital operating room.

If for some reason the animal is not under the handler’s control or is not housebroken, then the law allows a business to ask them to leave. But they cannot bar the individual from returning; only the animal.

They concluded the seminar with a helpful video summarizing the information covered in the session.

For more information about service animals, both presenters suggested checking out online resources such as those provided at www.ada.gov. In North Carolina, people can also visit the regional resource center website: www.adasoutheast.org.

Ellis noted his consulting business, which he founded in December 2017 to spread more local awareness about people living with disabilities, can also help to answer questions at any time. His website is www.sacsllc.org.

JACKSON – Northampton’s Board of Commissioners were unanimous in their decision. They voted here Tuesday night to deny Vista Green... read more