After having last Friday night off because of Hurricane Florence, all the Roanoke-Chowan area teams will be back in action tomorrow (Friday) night.

Hertford County will be playing their first game following an open date and a cancellation, going on the road to play North Pitt in Bethel.  Other games have Bertie at Manteo, Pasquotank at Gates County, Rocky Mount Prep at Northampton, and Lawrence Academy at Northeast-Hobgood Academy in Lasker.

Hertford County returns to action after a three-week break. The Bears are coming off an early-season open date (Sept. 7) and a week off because of the Hurricane (Sept. 14).

This Friday it will be Hertford County (0-3) at North Pitt (0-4). These are two teams each searching for their first win of the season. 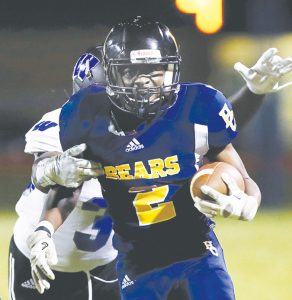 Amajhea Smallwood (#2 in blue) and his Hertford County High teammates will be playing their first game in three weeks when the Bears visit North Pitt on Friday night. After an off weekend due to Hurricane Florence, all six area teams have games set for this weekend. | William Anthony Photography

“We have to sustain drives and have good offensive execution and score points,” concluded Saxby. “And, our defense needs to play well.”

Bertie lost to Edenton J.A. Holmes two weeks ago, 50-24, despite trailing by just six early in the third quarter (30-24). Last week the Falcons’ home game in Windsor with Washington was postponed due to the hurricane.

This Friday it will be Bertie (1-2) traveling to Dare County to face the Manteo Redskins (2-2).

“Manteo plays hard and they gave a good coach,” said Bertie head coach Grantley Mizelle. “They also have a good running back and a big offensive line.”

“For us to be successful we need to take care of the football and tackle well,” closed Mizelle. “We also have to know our assignments on defense.”

Like the other area teams, Gates County had their game last week with Southeast Halifax cancelled due to the weather. Two weeks ago they beat Southside by 30 (33-3) at home and are back at home Friday night.

This week the Red Barons (3-0) will put an early undefeated record on the line against a surprising Pasquotank (2-2).

“Pasquotank has a good group of running backs,” said ‘Barons head coach Matt Biggy. “They run the ball and can also pass the ball. They are a good team to be playing as we try to go to 4-0.”

“Defensively, we really need to play well on pass coverage,” concluded Biggy. “Offensively, we have to do a good job of running the ball.”

Northampton County shocked previously unbeaten Williamston Riverside 24-19 on the road two weeks ago; but thanks to Hurricane Florence, they didn’t get a chance to follow that up with the postponement of their game with Washington County last week.

This Friday night they’ll face another team off to a surprising start: Rocky Mount Prep (2-1), as Northampton (3-1) hosts ‘Jaguars vs. Jaguars’ on Friday night in the conference opener for both teams.

“Rocky Mount Prep has a new coach and they are better than last year,” said Northampton head coach George Privott. “They are athletic and hungry for a big win.”

“We have to protect the ball on offense and also have good execution. We also need to tackle well on defense,” closed Privott as both teams look to win their conference opener.

The only backyard battle this week will be Lawrence Academy traveling to face-off with Northeast-Hobgood.  The Warriors missed a chance to grab a win against first-year program Pungo last week during the storm, while NEA-Hobgood was slated to face powerful Halifax Academy; cancelled for the same reason.

This Friday night Lawrence (0-2) will make their first trip to Lasker in two years to play NEA-Hobgood (2-0).

“They’re a tough team to play,” said LAW head coach Lee Hoffman. “They’re the defending state champs. They have size and speed which makes them tough to defend.”

“We need to control the ball to keep them off the field on offense, and defensively we need to slow them down and not give up big plays to their running game,” closed Hoffman.

“Lawrence likes to spread you out and run misdirection plays,” said Northeast-Hobgood coach Brandon Lanier. “They can also pass the ball.”

“We need to remember our assignments on defense,” concluded Lanier. “We also need to execute and block on offense.”