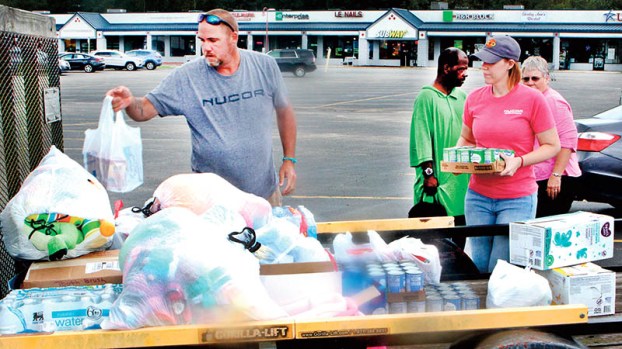 Sunday morning, Mamie Chamblee (right, with cap) helps load a trailer filled with items that will be part of a larger shipment of supplies destined for southeastern North Carolina to aid those impacted by Hurricane Florence. | Staff Photo by Cal Bryant

If you live, work or both in Bertie County, you fully understand how torrential rainfall from a hurricane/tropical storm can forever change lives.

As a paramedic and the wife of a Dominion Energy lineman, Mamie Chamblee of Merry Hill knows how flooding rains can quickly cut storm victims off from the rest of the world. She has been a victim herself….just as recently as Friday of last week when one of two tornadoes in Bertie County that spun up off an outer band of Hurricane Florence passed within a few miles of her home, prompting her and her two children to dive for cover inside the residence.

Mitchell Spivey and Heather Ann Lawicki, owners of Ya’ll Eat Yet – a food truck based out of Windsor – also know of the pain and suffering experienced by victims of flooding. Their former land-based restaurant – Hammerhead’s Oyster Bar in downtown Windsor – flooded several times, including on back-to-back occasions in September-October 2016 from Tropical Storm Julia and Hurricane Matthew that permanently closed the popular eatery.

Now, Chamblee and the Ya’ll Eat Yet duo are rallying to the aid of Hurricane Florence victims in the southeastern part of North Carolina.

“We’ve been on the receiving end of the generosity of others when we were impacted here at home, now it’s our turn to be on the giving end,” said Chamblee on Sunday morning in the parking lot of the Ahoskie Food Lion, a pre-arranged location to accept donations of supplies to help those in need from Florence.

“I used Facebook on Saturday to set this up,” said Chamblee, an employee at Nucor Hertford County, who was joined by her husband, Justin, to collect the supplies. “The word got out of what we were trying to do and we had many wonderful people to show up and make donations of needed items.”

Chamblee added that her effort was an offspring of one initially generated by her friends at Perry’s Diesel Performance in Elizabeth City.

“They put out a challenge to others to help fill their showroom with supplies that will be taken to those down in the southeastern part of the state where Florence caused massive damage,” she noted. “Justin and I decided we would help in any way we could.”

When the Chamblees arrived at the Ahoskie Food Lion parking lot, all they had was a small trailer in tow. Based on the amount of donated items – which included baby diapers, wipes, feminine hygiene products, baby food, paper towels, toilet paper, non-perishable canned goods and water – a quick decision was made to switch to a larger one.

By the time the husband-wife finished accepting items at the Food Lion parking lot in Murfreesboro – the second of their pre-arranged collection points – the enclosed (and larger) trailer they had borrowed was completely full.

“We had scheduled to make a stop at the Food Lion in Windsor, but we had to cancel that because there was no more room in the trailer,” Chamblee remarked. “We are so appreciative to those who made donations.”

The Chamblees delivered the donated items to Elizabeth City on Sunday night. There they will be added to what has been collected in the Elizabeth City area and transported this week to the Hurricane Florence affected areas.

Depending on the number of others wishing to add to the localized effort, Chamblee said she may set up another collection point this week. See her Facebook page (Mamie Chamblee) for more information.

Meanwhile, Spivey and Lawicki opted to offer assistance using their award-winning culinary skills. However, they initially didn’t know exactly how to offer their help. That changed on Sunday when they were put in contact with Gordon Knox, a local Aulander resident who is the director of the local branch of Disaster Relief USA, which is run nationally by ministries of the International Pentecostal Holiness Church. Knox traveled to Houston, Texas last year to help in the aftermath of Hurricanes Harvey and Irma.

“We’ve been put in contact with Gordon Knox and were in New Bern on Sunday to begin feeding people,” Lawicki wrote on the Ya’ll Eat Yet Facebook page.

She added they used the food they had planned to sell at pre-scheduled events over the weekend that were canceled due to the hurricane.

“We’ve had several gracious folks contact us regarding making donations to help offset our fuel and food costs,” Lawicki said. “Bless y’all for helping us help others. You are truly helping us to help even more people and for that we are eternally grateful.”

She noted that feeding those victims and volunteers on Sunday in the New Bern and Pamlico County areas was bittersweet.

“It brought back a wave of painful memories from when we lost our beloved Hammerhead’s Oyster Bar two years ago in Windsor,” Lawicki wrote on Facebook. “We know the heartache and devastation because we’ve lived it. It warms our hearts to be in a position now with our food truck to physically go and feed people in need, to give back to the ones who need it most.”

After returning to Windsor on Sunday night, Spivey and Lawicki re-stocked their food truck and set out on Monday morning en route to Dunn where they fed storm victims at a church that has been transformed into a housing shelter for hurricane victims there.

Those wishing to help Ya’ll Eat Yet offset its cost can make a donation to a PayPal account set up at hlawicki@yahoo.com.