Postponement of a pair of scheduled matches last week brought a halt to the Lady Eagles’ three-match win streak that raised their overall record to 3-3 after a 0-3 start.

But before the elements intervened, Northeast powered their way past Roanoke Rapids High 8-1, ending a short home stand at the Northampton County Cultural and Wellness Center here on Monday Sept. 10. 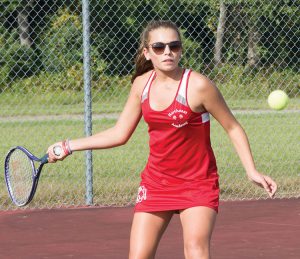 Top seed Jessie Martin continued her torrid play as she downed Kristen Pampib in a marathon match 2-6, 6-4, 10-5.  It was Martin’s fifth win against just one loss on the season.

In the doubles matches, Northeast made it a sweep as Martin and Smith downed Pampib and Shane Wangit.  Stephenson and Jones teamed to dispatch Riley Landen and Meghan Beam, while Johnson and Roslynn Morris took down Maddi Godfrey and Gabrielle Long.

After the home stand Northeast hit the road with a scheduled match Monday at the Rose Tennis Center in Murfreesboro at Chowan University against Ridgecroft. That match ended too late for press time.  Today they’ll play the first of two this year against rival Lawrence Academy in Windsor.

The threat of Hurricane Florence has forced many of the high school football games in the Roanoke-Chowan this week to... read more