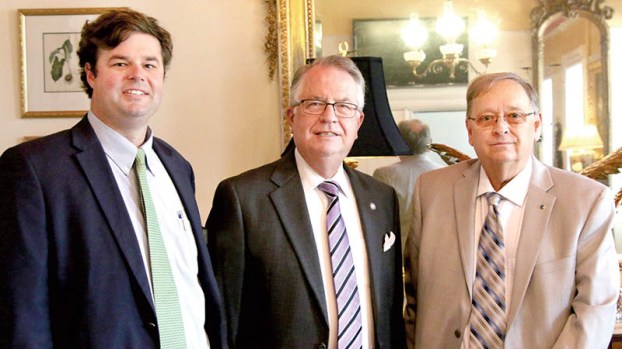 Chowan University names Board of Visitors Chair and Vice Chair

MURFREESBORO – Chowan University has named Thomas “Tommy” Edwin Forbes as Chair of the Board of Visitors, and Walter “Walt” Fletcher Pierce as Vice Chair. Both have previous Board membership and involvement with Chowan.

John M. Tayloe, Vice President for Development, said, “Tommy and Walt are both natives, businessmen, and invested in the community and the well-being of Chowan. Both are assets to the University. I am pleased to see them take on new roles and I look forward to continued success under their leadership.”

Forbes graduated from Chowan College (now Chowan University) in 1974 and the University of North Carolina at Chapel Hill in 1976 where he studied journalism and mass communication. He maintained a career with Nationwide Insurance until his recent retirement.

Forbes has served Chowan University in many capacities over the years. He is a long-standing member of the Board of Visitors and past president of the Braves Club (now known as the Brave Hawks Club – an athletic fundraising organization). He earned the title of Distinguished Alumni at Chowan University in 2015. He serves as public announcer at Chowan University men’s basketball home games and Southampton Academy home football games. Forbes was honored for his work with the North Carolina State Jaycees. He is a member of the Murfreesboro American George Lodge, and a Shriner in the Roanoke-Chowan Shrine Club. He is also a member of Murfreesboro Baptist Church and the Murfreesboro Chamber of Commerce.

Pierce graduated from North Carolina State University (NCSU) in 2005 where he earned a Bachelor of Science in agricultural business management and a minor in economics. He is a licensed North Carolina Real Estate Broker, holds a North Carolina Insurance License, and a North Carolina General Contractors License. His current role is that of owner and agent at Boyette & Robertson Insurance Agency. He is in his second year of service on the Chowan University Board of Visitors.

Pierce began his relationship with Chowan when he joined with business partner Julian Robertson, long-time supporter and donor. Pierce, in large part, became involved with Chowan due to his relationship with and respect for Robertson. Pierce and his wife, Mary Page, established the W. Julian Robertson Jr. scholarship in support of the Friends of Music at Chowan in memory of his mentor.

Pierce is a member of First Baptist Church in Ahoskie. He is a devoted supporter of Ridgecroft School, where he attended prior to NCSU. He is also involved in the Wolfpack Athletic Club at NCSU. He and his wife have a son, Dempsey, and daughter, Stuart.

To learn more about the Board of Visitors, contact the Chowan University Office of Development by calling (252) 398-1233.