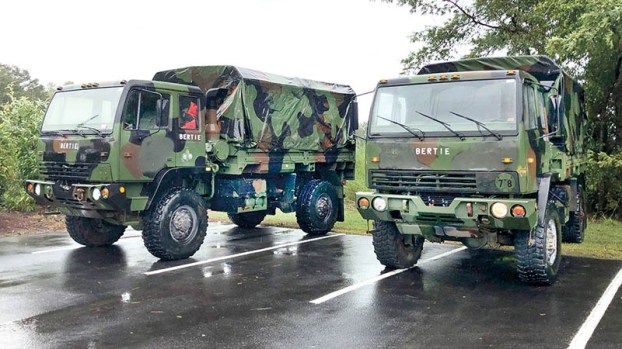 This pair of Bertie County high-wheel Emergency Services vehicles were dispatched to Beaufort County over the weekend as members of the county’s Fireman’s Association assisted with welfare checks and water distribution on both sides of the Pamlico River following Hurricane Florence.

MERRY HILL – While Bertie County was spared the brunt of devastation and destruction from Hurricane Florence when the storm made landfall in the southeastern part of the state on Saturday morning, county volunteers were quick to act in lending a hand to those less fortunate.

One of those locations was neighboring Beaufort County, where due to the large expanse of the county – bisected by the Pamlico River – assistance was requested in a couple of locales.

“Our service was requested by the state,” said Jodey Sary, chairman of the Bertie Firefighter’s Association. “When we got the call, we were ready to assist.”

Sary says both of Bertie County’s high-wheeled vehicles, capable of powering through floodwaters, were dispatched, though not for search and rescue, but for welfare checks and distribution of water and other supplies.

“We mostly rode with law enforcement offering water and meals to those who stayed behind and rode out the storm in their homes rather than evacuate,” Sary added.

Sary said parts of the county were cut off in several locations and the one high-wheeled vehicle Beaufort County owns was down. Three other members of the Bertie Association made the trip with him.

“I worked the south side of the county from Chocowinity down to Blounts Creek and Aurora with Jordan Rose,” Sary said. “Earl Hoggard and Corey Castelloe worked the north side to Bath, Belhaven and Terra Ceia.”

The trucks returned to Bertie County on Sunday, but if needed, could be dispatched again if called upon.

Bertie County Emergency Services director Mitch Cooper is part of a five-county Strike Team of Emergency Medical Technicians and Paramedics that are working farther south in Sampson County. He also gave praise to Bertie for how well its residents performed in the face of the storm.

“Bertie County did really well,” Cooper said by telephone. “Thanks to our preparedness we were able to hit this head-on. We were all prepared until we found (the hurricane) was turning away from us, but I was very impressed with how Bertie County residents sprang into action.”

Cooper is joining support personnel on the Strike Team, which in addition to Bertie, includes Chowan, Perquimans, Pasquotank and Dare counties.

“Everyone dispatched a fully-equipped paramedic ambulance which will be available when called upon,” he said. “Because we’re mobile we’re able to go anywhere.

Cooper said Bertie County suffered some trees being uprooted by what was believed to be an EF-0 or EF-1 tornado. That destruction occurred near Batchelor Bay Drive and Cooper Hill Road off NC-45 south near Merry Hill.

“Thankfully, there was no flooding,” he remarked. “The National Weather Service says the storm surge rise on the Cashie River was due to rainwater being pushed upstream by the winds. There was no major property damage, and most importantly, no loss of life.”

“Since we were on the northern side of the storm, the water was pushed from the Albemarle Sound north upriver,” he added. “None of it flowed south in the areas that are usually affected along the 95-degree drop in elevation from Roxobel to Windsor.”

If you live, work or both in Bertie County, you fully understand how torrential rainfall from a hurricane/tropical storm can... read more