JACKSON – A public hearing is scheduled for Tuesday, September 18 for the Northampton Board of Commissioners to consider the Planning Board’s rezoning recommendation.

Vista Green LLC recently submitted an application to rezone an 852-acre property near Seaboard from Agricultural-Residential (AR) to Heavy Industrial (HI). In August, the Planning Board heard arguments for and against the proposed rezoning.

By a unanimous vote, the Planning Board decided to recommend denying the rezoning because it would be “inconsistent with the comprehensive land use plan for Northampton County and is not reasonable or in the public interest.”

Now the final decision to deny or approve will be left up to the Commissioners at a special called meeting at 6 p.m. on September 18, which will be held at the Cultural and Wellness Center in Jackson.

“Due to the amount of people we think will attend the meeting, we can’t fit them all in this room 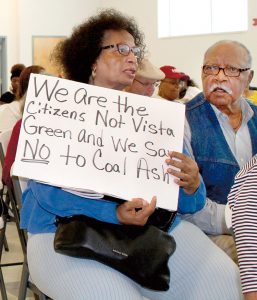 Annie Helton (left) holds up a homemade sign expressing her opposition to coal ash in Northampton County during last month’s public hearing held by the county’s Planning Board. | File Photo by Holly Taylor

(the Commissioner’s Meeting Room),” said Northampton Code Enforcement Director William Flynn when he went before the Commissioners last month to request a date for the public hearing.

In early 2017, Vista Green first applied for a special use permit which would allow them to use the site as a landfill to store coal combustion residuals, more commonly known as coal ash.

In previous interviews with the News Herald, Vista Green partner Wood Beasley III explained the site was ideal because of its remote location and its easy access to CSX rail lines. He also said there would be positive economic impact through job creation and expanding the county’s tax base.

Community backlash to that proposal, however, was swift. Opponents cited health concerns from coal ash as the main reason they did not want the facility located in Northampton County. They also believed the liners designed to safely contain the coal ash would not function on a long-term or permanent basis.

By February 2017, Vista Green had withdrawn their application due to what they said was “misinformation being spread around the community.”

In June 2018, Vista Green resubmitted their application for rezoning and a special use permit. Beasley told the News Herald in an interview Vista Green intended to provide incentives that will benefit the community and county. They proposed a Community Fund where 80 cents per ton (up to 1 million tons) will be collected annually and spent equally within the county’s five commissioner districts for charitable, educational, philanthropic, religious, or other non-profit purposes. That fund would be operated by citizens appointed by county officials.

Vista Green also promised to donate a property in Jackson to the county and to establish an annual STEM Scholarship ($3000 each year) to a college freshman who resides in the same commissioner district the facility would be located in.

Opponents to the coal ash landfill still maintained their previous arguments against the proposed rezoning.

At the Board’s regular meeting on September 5, the commissioners adopted rules of procedure for rezoning public hearings which will be applied to the upcoming hearing.

In accordance with General Statute 153A-52, the Chair of the Commissioner Board has the discretion to establish reasonable time limits for speakers, including the discretion to limit duplicative presentations. The Chair may also designate spokespersons for groups supporting or opposing the same position.

All people wishing to speak must register with the Board Clerk or place their name on a sign-up sheet before the hearing, and they must state their desire to speak in opposition to or in support of the proposed rezoning. Individuals must state their name and address for the record when called upon to speak.

The Chair may take any action reasonably necessary to preserve order at any public hearing.

After the comment period, the Board can deliberate, vote on the proposal, or choose to defer action to a later date.