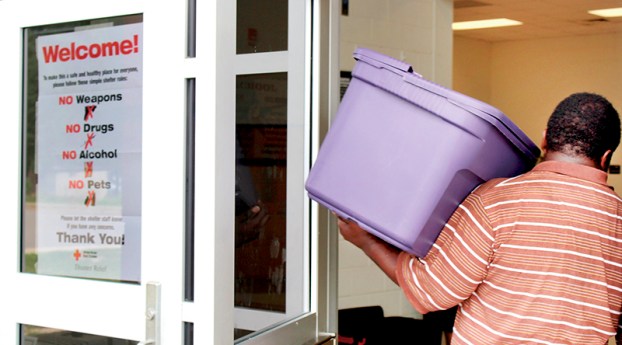 A Bertie County man carries his boxed belongings into the Bertie High School Gym. The site was one of three located at Bertie Schools that opened Thursday morning and are serving as a temporary refuge for those local residents seeking shelter from the fury of Hurricane Florence. Staff Photo by Gene Motley

For the next few days, Bond will work security at one of the three Bertie County Schools sites serving as Hurricane Florence emergency shelters. They are: Bertie High School in Windsor, West Bertie Elementary in Kelford, and Colerain Elementary.

At the last minute, a switch was made from Bertie Middle School to the High School – both located on US-13 North of Windsor – due to potential flooding issues with a retaining pond located at the Middle School.

The shelters opened at 10 a.m. Thursday, postponed a half-day from when their availability was first announced by Bertie County Emergency Services as Wednesday at 5 p.m.

Bertie County was hit especially hard in 2016, first by Tropical Storm Julia and then by Hurricane Matthew over a two-week time frame. This time, many residents were grateful not only for the preparation, but also to have a staging area such as these shelters.

Residents began trickling in on Thursday, carrying everything in tow from blankets, to medicines, to children with teddy bears and other comfort aids, for at least one night away from home with the predicted awesome natural disaster threatening.

Bertie County Department of Social Services oversaw the registration of the occupants, while the local chapter of the American Red Cross provided meals, cots, and some other necessities.

“We can service about 100-plus persons,” said Brenda Hines, a 10-year veteran of the Red Cross, who was supervising activities at the high school. “We will be open 24 hours and there is security provided by the Sheriff’s Department.”

At Bertie High, cots were assembled in orderly rows on the gymnasium floor; while at the two elementary schools evacuees made do with their arrangements in the hallways.

“They can’t bring any drugs, any weapons, or, unfortunately, any pets,” Hines continued. “Other than that, space is on a first come-first served basis and we aren’t turning anyone away.”

Bertie County Animal Control Officer Skip Dunlow made arrangements to set up a trailer outside, beside the high school grounds, for certain pet necessities, but none of the animals were kenneled inside the school.

For the sake of protecting privacy, none of the temporary residents were allowed to speak with the media inside the school grounds, nor could they be photographed. However, a few agreed to step outside and share their thoughts on what they anticipated experiencing over the next few days.

“We’re just here for the shelter,” said an evacuee who, with her husband, had staked out a small section of hallway at the Colerain shelter.

She had brought along her laptop computer so as to continue working for her senior citizens church group.

Unlike many of the evacuees, the couple said they do not live in modular housing, but wanted to be extremely cautious over their wood-frame home, which they say is over 50 years old.

“We would’ve had to withstand a lot of wind,” she added.

Alycia Saulsbury, a Bertie Department of Social Services worker and supervisor for the Colerain shelter, said most of the people arriving at her facility were coming from low-lying areas surrounding the town. Her crew of about six or seven DSS workers will work in four different shifts as long as the shelter remains open.

In Windsor, residents were asked to provide name, address, phone number, and next of kin so in the event of a worst case scenario there are organizations out there that help reconnect families.

“Folks are supposed to bring changes of clothes, personal items, bedding materials, pillows, blankets and all that kind of thing,” Hines said. “Air mattresses are alright, too.”

Both directors say the facilities will be open as long as necessary and hoped neither of the three would reach capacity.