The threat of Hurricane Florence has forced many of the high school football games in the Roanoke-Chowan this week to be postponed – twice.

Most of the Friday Sept. 14 games were re-scheduled earlier this week to be played on Wednesday, Sept. 12. However, with so many mid-week school closings for storm preparations, even those plans had to be scrapped.

Two high school teams would have had Friday night home games: Hertford County, coming off a bye week, was set to host Winterville South Central at the ‘Bear’s Den’ in Ahoskie. HCHS Athletic Director Charles Simmons is among the school administrators who hope the NC High School Athletic Association adds an extra playing week to the schedule to accommodate the many postponements, much as was done in 2016 following Hurricane Matthew.

Bertie High also had a home date set with Washington High School that was postponed. It gave the Falcons two off-weeks in their last three playing dates. 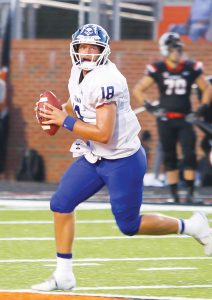 After a 302-yard passing performance against Davidson, Chowan University quarterback Bryce Witt and his teammates will have to wait before their next game. Saturday’s CIAA game between the Hawks and Shaw is one of several games postponed due to the threat of Hurricane Florence. | Next Level Photos / Charles Revelle

Meanwhile, four teams were due to play Friday away from home and had their games temporarily dropped. Northampton County was set to hit the road to face Washington County; also, Gates County at Southeast Halifax; Lawrence Academy at Pungo Christian Academy; and Northeast-Hobgood at Halifax Academy. All these contests will have to be re-scheduled, if possible.

In addition to Chowan University’s CIAA road game at Durham County Stadium against Shaw University being postponed, Elizabeth City State University has cancelled this year’s Down East Viking Classic at Rocky Mount with Winston-Salem State University; both were set for Saturday.

Chowan University Athletics have been affected by the weather through Monday. Women’s Soccer at Lincoln on Sept. 12 and both men and women’s matches at Lees-McRae on Sept. 15 were all postponed.

The Hawks’ volleyball home opener with Elizabeth City State on Sept. 13 was a casualty, as were matches at Bowie State on Sept. 16 and at Lincoln (Pa.) on Sept. 17. Make up days for these contests have yet to be determined.

Chowan’s men’s and women’s tennis teams were due to play at the Palmetto Invitational in South Carolina, that’s now been cancelled; as has the men’s and women’s cross country meet at the Adidas XC Challenge in Cary.