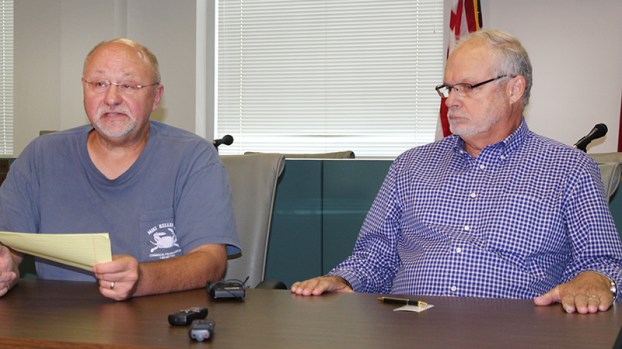 WINDSOR – Bertie County Commissioners chairman Ernestine Bazemore signed an order declaring a state of emergency for the county on Monday in anticipation of Hurricane Florence making landfall, and its potential effects on the county.

Later in the day – on the recommendation of Emergency Services Director Mitch Cooper – in an effort to protect rescue crews and first responders, the Commissioners backed that up with a mandatory county-wide curfew beginning at 8 p.m. on Wednesday (Sept. 12).

“We’ve been asked to advise that this storm is going to be particularly significant,” announced Bertie County Manager Scott Sauer at a Tuesday morning press briefing. “It’s anticipated that the worst day weather-wise for Bertie County will be on Friday.”

Sauer repeated early estimates as of Tuesday of tropical force winds of 50-to-60 miles per hour and tidal surge expected to be at heights of five-to-seven feet.

“This will be in the low-lying areas along the Albemarle Sound and the Chowan River, with overall estimates of 10-to-12 inches of rainfall,” he added. “We’re asking folks to take this very seriously because weather forecasts vary from location to location.”

Most serious, he emphasized is that the state is anticipating massive widespread power outages.

“The loss of power could be substantial for many of our areas for multiple days if not longer,” he noted.

There has been and also will be close monitoring of the flood-prone Cashie River according to Windsor Mayor Jim Hoggard, who revealed that his town had also declared a state of emergency.

“We’ve been making quite a few preparations for the things that fall in our area,” Hoggard said. “We’ve cleaned up the area of things like tree branches so we don’t lose power locally – though we do anticipate losing power in the (county-wide) area. There’s probably nothing we can do about that, but we’re trying to keep our own lines clear and working.”

The mayor said grounds crews have cleaned ditches and made other moves to hasten the exit of surface water.

“Our facilities in the lower areas (Liverman Zoo) we’ve already moved and will be doing more of that,” he acknowledged. “Generator fuel at the site and the sewer plant are also in place. We think we’re prepared, but we don’t want to minimize at all the severe nature of this storm. We could have a combination of wind and water, and water is our first concern.”

Hoggard said the 10-12 inches of rain anticipated are right at the border of whether the town will or will not experience flooding.

The county’s three emergency shelter locations will open beginning at 5 p.m. on Wednesday. The primary location will be the Bertie Middle School (US-13 North of Windsor) with two other additional locations at the West Bertie Elementary School (Governor’s Road in Kelford), and Colerain Elementary School (Academy St. in Colerain). The County Manager said he strongly encouraged Bertie residents in low-lying areas or those in mobile homes to give serious consideration to moving to a shelter.

“We would encourage those residents who are concerned about the structural integrity of their home, or if they’re in a mobile home, to please give strong consideration to taking shelter in advance of the storm,” Sauer implored. “Once the storm begins, with those sustained winds above 50 miles an hour, we will be limited, if not restricted, from moving any of our rescue equipment. Please take your neighbors, take your friends, and stay at one of our shelters until the storm is over.”

Hoggard said he could not predict any rising storm water flooding amounts to compare to what the town and county experienced in 2016 with Hurricane Matthew and Tropical Storm Julia.

“The amount of rain they’re projecting puts us right on the borderline … it could be, hopefully it won’t be; but we’re preparing for that,” the mayor said.

Hoggard said in the past the town’s flooding issues mainly have been drainage on the northern side of town where the water flows south; but improvements made since the last two major weather situations have resolved some of the problem.

“Usually, the issues we’ve had, it runs down from Food Lion through town trying to get to the river,” he admits. “We’ve been working on those, and that’s what we hope will be improved. As far as floodwater, that’s what comes upriver (from the Cashie), and that will be a different matter.”

Both administrators recommended closely following news reports, monitoring the National Weather Center, because this storm is predicted to be worse than Hurricane Hazel (1954), which struck the Tar Heel state over a half-century ago.

“It’s in all our best interests to hunker down, play it safe, and not be caught short by not taking this event seriously,” concluded Sauer.