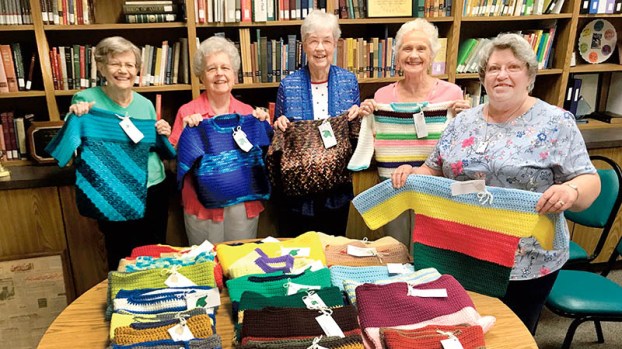 From left, Carol Sexton, Lynn Gray, Bonnie Hunsicker, Joyce Hutchinson, and SuEllen Askew – all members of the Peggy Lowe Knit & Crochet that meets weekly at Murfreesboro Baptist Church – display some of their handiwork that was donated through Heart Threads International to an orphanage in Bangladesh. | Contributed Photo

MURFREESBORO – A group of children in Bangladesh will have a roof over their heads and beds to sleep in thanks to efforts begun by two sisters, one a Northampton County local.

Harris explained the project began when one of Bradway’s coworkers in Durham connected her to the two pastors, Michael Subash and Suresh Biswas, who were looking for help funding the construction of an orphanage in a rural part of the country known as Gopalganj. Before deciding to work with the pastors, Harris and Bradway checked to make sure the cause was legitimate and any money they sent would be put to good use.

“Every time she (Bradway) sent a check, he sent her a receipt for what he did with the money, and he sent her pictures,” Harris explained, noting the donations often went towards purchasing building materials such as brick and mortar. “They seem to be very honest and very sincere in their love for getting this orphanage built.”

The grand opening for the completed building is scheduled for October. The orphanage is built to house a maximum of 25 girls and 25 boys, but they’ll start off first with about 30 children to make sure everything is manageable.

“In Bangladesh, the healthcare is very poor and often moms die in childbirth,” Harris said, explaining how that factored into the high number of orphans who needed care. “If you don’t have money, you don’t see a doctor.”

Once the orphanage is up and running, the estimated cost to keep it going will be about $1200 a month. Harris said they’re hoping to find sponsors who would be willing to donate maybe $20 or $30 a month, to lessen the financial burden on themselves.

“We can’t build it and then walk away,” Harris said.

Through their organization, they’ve also been able to work on several “mini-projects” such as paying for a new deep well to be dug in the village to replace the old contaminated one. Harris noted that is something the entire village will benefit from, not just the orphanage.

Other mini-projects include sending helpful items such as blankets and pillowcase dresses.

Heart Threads International also occasionally partners with other local organizations to make items to send to the orphanage.

Recently, the Peggy Lowe Knit & Crochet group worked to make sweaters for the children. The group, which meets weekly at Murfreesboro Baptist Church, has been knitting together for about 10 years and has seven regular members. They often use their knitting skills for charity projects like this.

“They’re really good ladies,” Harris said. “They have blessed us with 33 sweaters. They all use the basic same pattern, but they all do their own thing. In each sweater you see each woman’s creativity expressed in her work.”

Harris said it only took the group around two months to complete the sweater project. She mailed the package to Bangladesh during the last week of August.

One of the biggest challenges Harris said they’ve faced so far is simply getting packages through customs when they arrive in the foreign country. Each package is charged a tariff when it arrives, driving up the cost of sending even small items like band-aids and bandages.

But the cost is worth it, Harris admits, just knowing the children will benefit from their work.

“The most rewarding thing has been to see the children and how excited and happy they are to get something. It’s such a blessing,” she said. “These children will be fed, they will be schooled.”

In addition to funding the orphanage and continuing the mini-projects, future goals include constructing a small clinic which will benefit the whole community.

“We just flip a switch and don’t even think about it. We are so blessed,” Harris said of life in America compared to life in the rural village on the other side of the world.

Harris said she is looking forward to continuing their work, noting she and Bradford do not receive any salaries or perks for running Heart Threads International. Everything they receive goes straight into the mission to help the village in Bangladesh.

“For two sisters to launch out and do something like this with nobody behind us, it’s been quite an undertaking,” she admitted.

For people interested in helping the cause, Harris suggested they visit their website www.heartthreads.net. The website contains information about how to donate and how to participate in a “party for a purpose” where groups can cut and decorate clothing to send to the children.

A variety of jewelry made by Bradway is also on sale locally at King’s Coffee, located at 117 East Main Street in Murfreesboro. One hundred percent of the proceeds go towards fulfilling needs the organization is working on. Harris explained Bradway makes the jewelry as a hobby, so she doesn’t keep any of the money for herself.

Harris also said she’s available to speak about their mission to local groups and organizations who may be interested in helping out. She can be contacted through the website.

“When you’re helping people, it doesn’t matter where they live,” Harris concluded.

Officials with the local Board of Elections offices in the Roanoke-Chowan area, as well as 39 other counties in eastern... read more