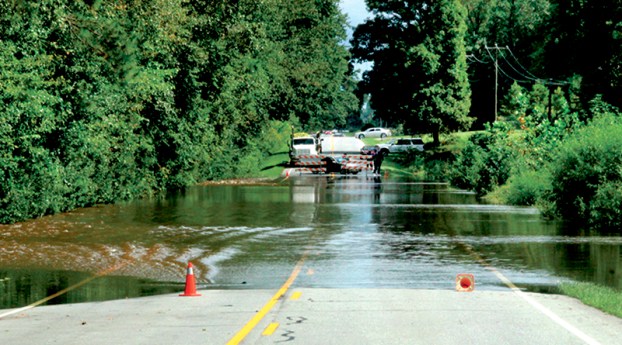 This photo, taken from a past hurricane event along NC 45 near Harrellsville, shows the reason why barricades are in place. Did you know that more deaths occur due to flooding than from any other storm-related hazard? Avoid areas already flooded, especially if the water is flowing fast. Do not attempt to cross, on foot or in a vehicle. Additionally, you do not know of the possible danger that lurks beneath a flooded roadway. Road beds may be washed out under the flood waters. File Photo by Cal Bryant

All eyes on Florence

Hurricane Florence has the potential to inflict widespread damage across North Carolina.

This powerful storm, which “exploded” around noon on Monday – intensifying in just a matter of a few hours from a Category 2 to a Category 4 storm with winds peaking at 130 mph – is forecasted to make landfall somewhere along the North Carolina coast as early as Thursday.

But exactly where that landfall occurs, as well as what path it takes once moving over inland areas, is not pinpointed at this time.

However, no matter what path Florence chooses, all eyes need to remain focused on this potentially destructive storm.

“This is one of the biggest storms I’ve seen in my history and no storm from what we’re being told has ever tracked like this across the Atlantic,” Bertie Emergency Management Director Mitch Cooper said early Monday afternoon.

“This is a very serious event, and people need to take this to heart, prepare, and be ready for catastrophic damage,” Cooper added.

At 8 a.m. Monday, Bertie was the first local county to declare an individual State of Emergency. For Bertie residents this means all sales of alcohol are prohibited until a time/date yet to be determined. It also prohibits the sale of weapons or ammunition.

There will be a countywide curfew in Bertie starting at 8 p.m. on Wednesday for non-essential emergency personnel.

Bertie Emergency Management has issued a voluntary evacuation for water front properties and low-lying flood prone areas. If you are planning to evacuate, you need to do so by 8 p.m. Wednesday.

Bertie officials will also use the Cashie Convention Center, located on County Farm Road, as a backup Command Center for first responders.

Cooper said according to the last weather briefing he received at 12 noon on Monday, Bertie County could experience Tropical Storm force winds (39 mph) beginning late Wednesday night into Thursday morning followed by full-effect Hurricane force winds Thursday into Friday between 74-110 mph. He added another bit of bad news for a county with a long history of massive flooding events….Florence has the potential to dump 15-to-20 inches of rain in her path.

“This system is expected to make landfall on the as a Category-4 and move across the state as high as a Category-3,” Cooper said.

“This is a very serious storm for Bertie County, probably the most serious in my capacity as Emergency Services Director,” he added.

Meanwhile, Hertford County officials are watching Florence very closely. Although the county will enact a State of Emergency on Tuesday morning, it will not ban alcohol or firearm sales; nor will a curfew be in place.

“There will be no immediate restrictions with our curfew, but we may amend that once we see how severely our county will be impacted,” said Chris Smith, Hertford County’s Emergency Management Director. “It all could change for us depending on where this hurricane comes onshore.”

For now, Smith said the current track and forecast for a landfall along the southeastern NC coast has remained constant over the past few days.

“But there’s always a measure of uncertainty with hurricanes,” he stressed. “Any change in the track, just a 100 miles or so, can make a big difference on who gets hit the hardest. Expect for some of our senior citizens, no one I can think of has seen a hurricane of this magnitude since Hazel in 1954.”

Smith said that the forecast he received from state officials on Monday showed Hertford County receiving 7-to-9 inches of rain. Tropical Storm force winds are expected to arrive sometimes on Thursday.

“We’re planning for the worst and hoping for the best,” he noted. “I encourage all of our citizens to make hurricane preparations now. Once the storm gets to us, please stay at home and off the roads.”

Like other surrounding counties, Northampton wasted no time in getting prepared early for the storm.

Local law enforcement and emergency services, he said, were following their usual procedure to prepare for dealing with the hurricane.

Storey said his department was working quickly to prepare to open shelters for residents if necessary.

“Our primary shelter is the Northampton County Cultural and Wellness Center in Jackson,” stated Storey. “The secondaries are based on which way it looks like it’s going to affect the county. On the west, it’s Northampton County High School in Gaston, and on the east, it’s Conway Middle School in Conway.”

Storey has been closely watching the weather updates, noting this storm was being compared to Hurricane Hazel which hit North Carolina hard in 1954.

“It was before my time,” he said, “But when I was a little boy, I still remember folks pointing out trees and buildings, and say that was because of Hurricane Hazel.”

He urged people to be prepared and take action, making sure they had emergency kits and other important supplies.

“We’re talking about a catastrophic hurricane when it hits land. This is a life-threatening storm. I just don’t want people to underestimate it,” he concluded.

Northampton County Manager Kimberly Turner said Monday morning they hadn’t yet made a decision to declare a state of emergency within the county. She has been working closely with Storey to stay informed about the conditions.

“Once we get a better understanding of what’s what with this hurricane, then we’ll make some decisions,” she reported.

With the projected wind and rain, numerous downed trees and long-lasting power outages could occur near and inland from where the center of Florence strikes. This threat of tree damage and power outages may also extend across Florence’s larger swath of tropical-storm-force winds. Structural damage to homes and buildings is possible, particularly where the core of any hurricane-force winds moves through.

As of noon on Monday, Florence was more than 1,200 miles east-southeast of Cape Fear (Wilmington, NC area), moving westward.

Should it maintain its projected path and strength, Florence will become only the fourth Category 4 hurricane to make landfall along the U.S. East Coast north of Georgia, joining Hugo (1989), Gracie (1959) and Hazel (1954), according to a historical database posted by www.weather.com.

All local citizens are encouraged to a watchful eye on this storm. The R-C News-Herald’s website and Facebook page will be updated to include all the latest news concerning this storm. Residents can also keep abreast of the storm on local TV and radio stations.

“We are still thinking it’s going to be very dangerous coastal storm surge of 10 feet or more,” Sprayberry said Monday, “with inland flooding from rainfall because we do think the system will stall once it makes landfall with sustained high winds.”

Statewide threat assessments predict significant risks not only to the coast but to inland and Western North Carolina counties, where extensive flooding and landslides caused by torrential rain are a possibility.

Evacuations are already underway in Dare County and may begin soon in other Outer Banks and coastal communities.

The state Department of Transportation and the State Highway Patrol are coordinating for potential evacuations to move smoothly.

Aviation units, including eight Blackhawk helicopters and other N.C. National Guard resources are preparing for “hoist operations” to rescue victims and heavy-lift helicopters like Chinooks are also being requested

Food, water and shelter warehouses are being activated and stocked across North Carolina.

Widespread power outages are predicted because the storm will not leave North Carolina immediately, it “will be with us at least a few days once it hits.”