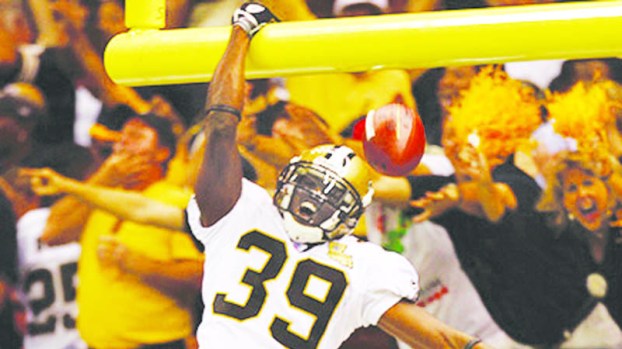 Murfreesboro’s Curtis Deloatch celebrates a 2006 touchdown for the New Orleans Saints by dunking the ball over the goalpost. Deloatch was recently inducted into the North Carolina A&T Sports Hall of Fame. | Courtesy Bonin’s Briefs

GREENSBORO – North Carolina A&T athletics has more than its football victory over East Carolina to celebrate. A former Hertford County High football player, a walk-on at the school turned NFL standout, was one of nine new members inducted into the school’s Sports Hall of Fame. The induction took place here Thursday, Sept. 6 at the Alumni-Foundation Event Center.

Born and raised in Murfreesboro by his grandparents Sterling & Lucy Deloatch, when Curtis Deloatch, Sr., walked onto the NC A&T campus two days before classes started in 1999, he did not have any classes, a place to stay and he certainly was not a college football player.

By the time he left in 2003, he was an Aggie football legend with a promising NFL career ahead of him.

Deloatch’s grandfather drove him to campus that first day and discovered his grandson did not have any classes nor a room. The elder Deloatch then drove his grandson to the bank, got the money, and got him registered. Days later, an Aggie assistant coach remembered Deloatch from his days as a high school football player and asked him to walk-on the Aggies team. After a year of sitting and waiting for his time to play, that opportunity finally came when the punt returner in front of him on the depth chart was injured.

Early in the season an assistant coach inserted Deloatch into a game to the surprise of then-head coach and fellow future Hall of Famer Bill Hayes. To Hayes’ delight, Deloatch returned his first collegiate punt for a touchdown, but unfortunately it was called back because of a penalty. Undaunted, Deloatch returned the next punt far enough for him to get the job permanently and a Hall of Fame career was born.

Not only did he earn many awards and honors during his four-year career, he also earned a B.S., degree while becoming a member of Omega Psi Phi Fraternity, Inc.

In 2000, Deloatch won Mid-Eastern Athletic Conference Rookie of the Year while earning a full scholarship.

In 2001, he was a first-team consensus NCAA 1-AA All-American, first-team All-MEAC, Aggie Club Award winner, Peach State Classic MVP; including a 79-yard punt return for a touchdown and an interception return 61 yards for a touchdown.

Deloatch was also named 2001 Defensive Back of the Year with four interceptions while returning two for touchdowns. His 26.5 yards per punt return still stands as an NCAA FCS single-season record. That same year he set an NCAA FCS and school record with five punt returns for touchdowns in a season and currently ranks eighth all-time in NCAA FCS history in career return yardage.

In 2002, he earned second-team All-MEAC honors and in 2003 he led the Aggies to their second MEAC title in five years. During the ’03 season, he blocked a field goal and returned an interception against Florida A&M to help the Aggies stay undefeated in the conference. N.C. A&T played Hampton in the MEAC Championship game and Deloatch contributed to the win with two interceptions and four pass deflections. He finished his senior year repeating as MEAC Defensive Back of the Year with four INTs and one pick-six. He earned his second Aggie Club Award and was named first-team All-MEAC.

Deloatch went on to play professional football in the NFL for five years for the New York Giants, New Orleans Saints and Carolina Panthers.

Deloatch, 36, left a big imprint on NFL history while a member of the Saints in 2006 during a Monday Night Football game against the Atlanta Falcons. The Saints were returning to the Louisiana Superdome after the famous facility was closed because of the effects of Hurricane Katrina. In an emotionally charged environment, Deloatch recovered a blocked punt in the end zone for the team’s first score since the tragic storm, then leaped and dunked the ball over the goalpost sparking a wild celebration on national TV.

Deloatch currently lives in Charlotte, with his wife Danielle and their four children, Torry, Aliah, Sagaia and C.J.