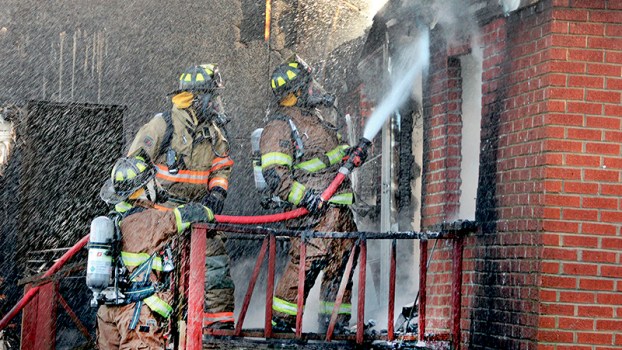 Shown here are members of the Ahoskie Rural and Winton fire departments battling a blaze on Vann Road in 2016. File Photo by Cal Bryant

WINTON – There’s good news to share for over 600 homeowners in Hertford County….the insurance policy on your residence may be lowered.

At Tuesday’s regularly scheduled meeting of the Hertford County Board of Commissioners, a new contract between the county and the each of its 12 fire departments was approved. Included in the new contract was to expand the coverage areas of the rural departments from five to six miles. That means 623 additional residences across the county are now within the six-mile insurance districts of their respective fire departments, a fact that will help lower their homeowners insurance rates.

Chris Smith, who serves as the county’s Emergency Management Director and Fire Marshal, presented the new contracts to the commissioners for their approval.

“These new contacts extend the (homeowners) insurance districts from five miles to six miles,” Smith informed the board members. “What that means is that for years we’ve had residents who lived between five and six miles of the fire department in their area who had a 10 ISO rating. Their homeowner insurance rates were higher than those who lived within a five-mile radius.”

Smith added the new ISO rating will be a 9s for those in the expanded six-mile districts. He said that new rating can be equivalent to as much as a $115 annual savings on a homeowners policy (depending upon the home’s value and the insurance carrier).

Those in that expanded district will not see an immediate decrease in their homeowners insurance rates.

“If you (commissioners) approve these new contracts today (Tuesday), they have to go back to the state office and then through the ISO process, but we believe about 623 homes will see some monetary effect on their insurance rates,” Smith noted.

He later added that the expected turn-around time for the State/ISO to process the new changes will be in the range of 60-to-90 days.

“The most likely effective date as far as when the homeowner could see the reduction in the premium could be as far as January 2019. If they have not seen a change at that point I would recommend they call their insurance provider,” Smith suggested.

According to a spreadsheet of each rural fire department in the county, the expanded six-mile district adds the following:

Meanwhile, Union VFD has 526 homes in its five-mile district.

Smith explained to the commissioners how the county qualified to have its fire departments expand their insurance districts by one mile.

“It all started with the big one – consolidating the Ahoskie and Murfreesboro PD’s (police departments) and the Sheriff’s Office E-911 call centers into a single dispatch point (the Hertford County E-911 Center),” Smith said.

“The rural fire department automatic aid agreement was another item that helped us in this effort,” Smith continued. “In order to expand to a six-mile fire district we are required to have a two department response to structure fires. Also, that requires all of our fire departments to hold automatic aid training four times per year.”

The commissioners approved the measure without objection.

Smith later told the Roanoke-Chowan News-Herald that the new expanded insurance districts only go out for a six-mile radius from the rural fire stations.

“There are still some 200 homes out there, scattered throughout the county, that this will not affect and still in a class 10 area,” he said. “The only way to pick them up would be for our current fire departments to build substations or the state comes out with a seven-mile district, which is unlikely anytime soon.”

He added that those living further than a six-mile radius from their closest fire department does not mean no one will answer their call when a fire occurs on their property.

“Those calls, all calls, are answered and the fire trucks will be dispatched, no matter how far out they are,” Smith stressed. “We respond to those locations; the issue there is that the state does not recognize them for a cost reduction in their homeowners insurance rate. A Class 10 is a non-rated insurance rate.”