PLEASANT HILL – A lone suspect is sought in the robbery of a gas station near here early Saturday morning.

Captain Patrick Jacobs of the Northampton Sheriff’s Office said the Pilot Travel Center, located on NC 48 at I-95, was robbed at 4:28 a.m. No one was injured in the heist.

“All we know about the suspect at this point is we believe he is a black male,” Jacobs told the Roanoke-Chowan News-Herald. 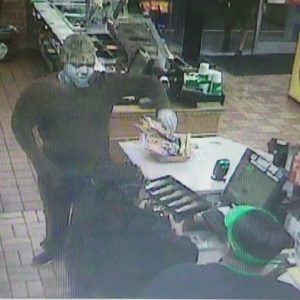 The Northampton County Sheriff’s Office is asking for the public’s assistance in identifying the person shown facing the camera in this image. The photo show a male subject responsible for an armed robbery that occurred on Saturday, Sept. 1 at the Pilot Travel Center, located on NC 48 at I-95 just south of the North Carolina-Virginia state line.

Jacobs said the suspect was not wearing a mask. However, he did attempt to conceal his identity.

“The suspect had used some type of paint on his face in an apparent effort to disguise himself,” Jacobs stated.

Images captured by the store’s surveillance video show the suspect initially standing at the corner of the checkout counter. He then moves behind the counter, where two employees were standing.

“After ordering the employees to open the cash register, he joined them behind the counter at which time he reached inside the cash drawer and stole the money,” Jacobs said.

The amount of cash taken in the heist was not disclosed.

Jacobs added it is not believed that the suspect had a weapon.

“He only made a verbal threat that he was there to rob the store; there was no type of weapon seen by the employees,” Jacobs noted.

There is no other surveillance video showing the suspect outside the gas station.

Anyone with information on the identification of this suspect is encouraged to contact the Northampton Sheriff’s Office at 252-534-2611 or the Crime Stoppers Line at 252-534-1110. The identity of the caller is kept confidential.

HENRICO – Two motorists from Virginia were killed on Labor Day during a wreck on River Road near Henrico in... read more